Orthodontic Extrusion of an Impacted Maxillary Incisor due to Compound Odontome in an 11-year-old Male Child: A Case Report

Odontomes are hamartomous lesions or malformations rather than true neoplasms. They frequently cause impaction, delay in eruption of permanent teeth or even at times deciduous teeth retention. This case report describes treatment for compound odontome in an 11-year-old male who had presented with the chief complaint of excessive space with respect to upper front teeth on left side. Radiographically, a calcified mass was apparent in association with the impacted permanent left maxillary central incisor, which led to failure of permanent upper left central incisor eruption and provisional diagnosis of odontome was made. A sequential surgical approach, odontome removal and exposure followed by orthodontic traction of the impacted tooth with closed eruption technique was followed to achieve proper incisor positioning. Management and close monitoring resulted in successful esthetics, good periodontal health and functional occlusion.

Under normal circumstances, maxillary lateral incisors are usually last to erupt, completing the appearance of anterior dentition, often a year after eruption of the adjacent central incisors. The situation of lateral incisors when fully erupted in association with missing either one or both central incisors, should always be deemed abnormal, irrespective of a deciduous central incisor is still present or not and further investigation is needed to ascertain cause(s) for such aberration.

The aim of treatment of impacted tooth is achieving its proper alignment in the dental arch, in a stable position, with a sufficient keratinized gingiva. The surgical and orthodontic technique allows the traction of the impacted teeth to its correct position in the alveolar ridge.

An 11-year-old male child with late mixed dentition reported with chief complaint of excessive space in upper front teeth on left side in the outpatient department of the unit of Pediatric Dentistry of our institute. His previous medical and dental records were non-incidental, with no history of trauma. Family history was also noncontributory, with no evidence of clinically missing/ malformed tooth or any odontome in his elder sister. He presented with a straight profile and competent lips. A bilateral angle class I molar relation with minimal overjet and overbite was reported. The crown of the impacted tooth was not palpable neither in the labial vestibule nor on the palatal aspect. A periapical and panoramic radiograph indicated a radio-opaque mass in the path of eruption of left maxillary central incisor. To identify exact size and site as well as the angulation of the impacted tooth, 3D imaging was done which revealed a calcified structure of approximately 5–6 mm present on the palatal aspect of the impacted maxillary left central incisor, causing it to deflect from its path of eruption (Figs 1A and B). 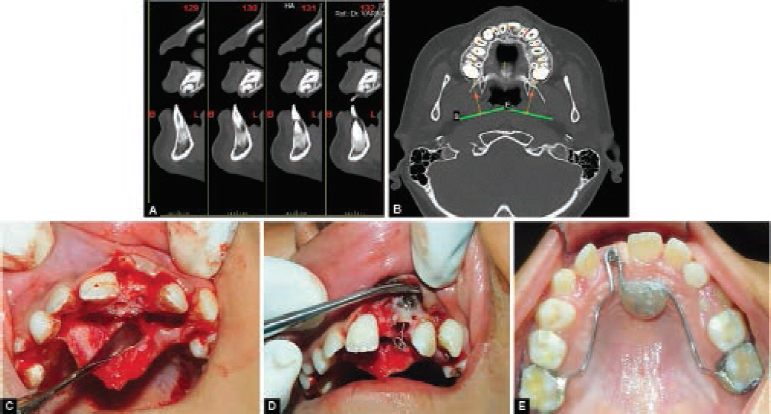 Based on clinical and radiological findings, case was provisionally diagnosed as odontome with impacted left central incisor.

The patient was draped and painted with 5% Betadine followed by oral rinse with chlorhexidine mouth wash. Under local anesthesia, the mucoperiosteal flap was elevated from maxillary canine (left) to maxillary canine(right) and bone from the palatal side of impacted maxillary incisor was removed with the bur under continuous saline irrigation to access and excise the calcified mass (Figs 1C and D). On the labial side of an impacted incisor, crown was exposed and bonding of lingual button was carried out, around which a ligature wire was twisted (Fig. 1D). After irrigation of the surgical site, bilateral flaps were approximated and sutured with 3–0 silk suture material. All the carious teeth have been restored.

For fabrication of the modified traction appliance, stainless steel bands were adapted around maxillary first permanent molars and a working model with bands in place was prepared in dental stone. A 0.9 mm wire was adapted on the palatal aspect in the cast and a loop was embodied in wire to obtaining anchorage required for orthodontic traction. This modified Traction appliance was luted in place (Fig. 1E). Traction application was done by twisting eyelet ligature wire with loop and activation was done after every three weeks to provide adequate force without any devitalization of the tooth (Fig. 1E). The tooth moved gradually towards occlusal level by 3 to 4 mm inside the bone. Since the distance between the hook and the incisal surface of the impacted incisor was reduced so the further traction by ligature wire was not possible and only the incisal edge was exposed to oral cavity at nine months follow-up.

The patient’s maxillary incisors were bonded using 0.22 × 0.028 twin bracket with a Mclaughlin Bennett Trevisi (MBT) prescription and an open coil spring was added to create space for their eruption (Fig. 2C). At 12-months, stainless steel wire with a loop was placed and it was attached to the bonded lingual button with e-chain, which was replaced every three weeks. At 20 months of follow up, the left maxillary central incisor reached the occlusal level but was slightly rotated distally. Over two years of treatment the tooth was properly aligned with the adjacent teeth. After the complete exposure of the clinical crown, the tooth remained vital without any signs of external root resorption. Entire procedure is summarized in (Fig. 2A to G). The patient and his family were pleased with the treatment progress and the results obtained. Esthetics and occlusal goals as envisaged at the beginning of treatment were met.

Odontome is one of the reasons for obstruction that may prevent normal eruption. Although inconsistent in size/type, whether complex/composite type, usually present with a broader and wider cross section. More likely to prevent incisor eruption than a supernumerary tooth.The term odontome was first used in 1967 by Paul Broca and “they were considered as hamartomas instead of neoplasms comprising most common slow growing, non-aggressive odontogenic tumors where hard tissues are laid down in an atypical pattern due to architecture of odontogenic cells failing to reach normal morpho- differentiation”.

It is strongly recommended that “all teeth that have not erupted six months after the normal eruption time be examined with diagnostic aids to assess for potential causes of delayed eruption”.1 Clinical differential diagnosis included an Ameloblastic fibro-odontome, Adenomatoid odontogenic tumor, Calcifying odontogenic cyst, Focal sclerosing osteitis, osteoma. However, routine hematological values were normal. The radiographic differential diagnosis included odontome, ameloblastic fibro-odontome, and ameloblastic fibro-dentinoma. Early diagnosis and interception in these cases is the best approach for their management.2 Small odontomes are usually an accidental finding on the radiograph while investigating for missing tooth in an arch. However, it is a painless small growing mass that leads to the expansion of a cortical plate, and pain on secondary infection. The 3D imaging technique provides the exact size and site of the mass and helps in surgical treatment planning.When more than three fourth of root is completed and the tooth does not emerge to oral cavity, it can be considered as impacted, especially if its antimere has erupted more than six months ago. The longer the impaction time, the weaker prognosis is expected to be.2 Evaluation of mechanotherapy possibilities to provide enough space and anchorage should be considered when forced eruption is planned.3

In this case, extrusive force vector passes from buccal center of resistance, so clock wise rotation of tooth had been predicted. This type of tooth movement is favorable in this case because it brings the crown to line of occlusion root near the normal inclination.

The surgical techniques used to expose impacted anterior maxillary teeth are apically positioned flap, closed eruption and closed flap.3 The more extensive surgery, the more adverse side effects such as gingival recession, bone loss and reduced width of keratinized gingival.4 These complications have negative effects on esthetic result. In this case, the position of crown was apical to the mucogingival line but enough keratinized tissue was there, so we used closed eruption technique. Therefore, the function has been recognized, besides position and esthetics of tooth in the oral cavity, the integrity of the periodontium and surrounding structure was maintained.5 Three accepted ways of surgical exposure have been suggested as follows: First, circular excision of the oral mucosa immediately overlying the impacted tooth, the second approach is the apical repositioning of the raised flap which embodies attached gingiva which is overlying impacted tooth and third, closed eruption technique consisting of raised flap incorporating attached gingiva which is fully replaced in its former position post-bonding attachment to the impacted tooth.6 The closed eruption technique is considered to be better considering aesthetic and periodontal outcome in comparison to other techniques.The undesirable aesthetic effects such as increased crown length and gingival scars were more prominent in apically positioned flap technique than the closed eruption technique.7

Another factor to be considered is “traction or extrusion force” while aligning the impacted central incisor which may influence clinical crown length and post alignment vitality. Traction forces greater than 50 g may lead to post alignment non-vitality. The Ni-Ti arch wire has long range of action due to high springiness and low load deflection rate. The 0.012-in ligature wire has been twisted around deflected Ni Ti overlay to produce force. In the next visit, again the ligature wire was twisted. This type of activation is very simple and fast so it needs short chair time. The less manipulation during activation causes less patient pain, discomfort, and less probability of ligature wire disruption or debonding on impacted tooth.

The disadvantage of this therapy is a longer treatment period and some complications like ankylosis, non-vital pulp, and root resorption.8 Other complications can occur due to the removal of an extensive amount of bone to expose the impacted teeth such as gingival recession, delayed periodontal healing, gingivitis, bone loss, and decreased keratinized gingiva width.9

Why this Case Report is Important to Pediatric Dentists?

This case report did not receive any specific grant from funding agencies in the public, commercial, or not-for-profit sectors.

Authors would like to thank the patient and their family members.