Pain during dental procedure has a profound effect on the behavior of children. The comfort controll injection system is a compact, portable design that injects the LA solution with constant speed and pressure control. Insulin syringe needles are short and very thin that are made to lesser discomfort during LA administration.

Material and methods: Children between 5 and 9 years of age requiring local anesthesia on both sides of arch for various dental procedures were divided into 2 Groups: Group A, comfort controll injection system and Group B, insulin syringe. The mandibular local infiltration was administered using comfort control device on the left side and the insulin syringe on the opposite side at the first appointment and subsequent appointment respectively. Prior, during and after the procedure, the heart rate and saturated oxygen rate were measured using pulse oximeter and FLACC (Face, Legs, Activity, Cry and Consolability) and MCDAS (modified child dental anxiety) were recorded.

Conclusion: Comfort control device is introduced several years back and best alternative to other syringe system still it did not get popularity. It is important for clinicians to be familiar with these devices for dental procedures to best explore them.

As stated by Dean Koontz, “Pain can be tolerated only when it is embraced. Denied or defeated, it grows in perception, if not in reality.”1 Pain and dentistry are often synonymous in the minds of patients. As a result, daily practice in dentistry is based on providing painless injections and achieving adequate anesthesia. The application and induction of local anesthesia have always been difficult tasks and this demands an alternate method that is convenient and effective. A painless administration of local anesthesia facilitates good behavior and cooperation from the child.2

Anxiety and phobia are major issues in children while delivering dental treatment. A reduction in the anxiety level is important even before injecting LA, especially in children and this will be done by employing a syringe, which is smaller in size, color, and less scary than normal conventional syringes.3 Thus, in the present study, insulin syringe and comfort controll system were compared in reducing the anxiety of the patient.

Hence, this study aimed to compare the pain perception in children while using the comfort control syringe and the insulin syringe during bilateral dental clinical procedures. The objectives of this study were:

Patients visiting the Outpatient Department of Pedodontics and Preventive dentistry requiring the use of local anesthesia for treatment on both sides of the arch were selected. The ethical approval for the study was obtained from the institute. The sample size was calculated with an expected prevalence of 60% and absolute precision of 10%. The final sample size was estimated to be a minimum of 15 in each group. The informed consent was obtained from parents or caretakers by providing them with detailed written information that was duly signed by them, thereby permitting the participation of their children. The privacy and confidentiality of all subjects were maintained.

The mandibular local infiltration was administered using a comfort control device on the left side and the insulin syringe on the opposite side of 0.5 mL at the first appointment and subsequent appointment respectively. Prior, during, and after the procedure, the heart rate and saturated oxygen rate were measured using a pulse oximeter and FLACC and MCDAS were recorded. The child’s questionnaire included the Modified Child Dental Anxiety Scale (MCDAS) developed by Wong et al. in 1998. A five-face scale was used, with equivalent scoring (not worried = 1; very slightly worried = 2; fairly worried = 3; worried a lot = 4; very much worried = 5).4 In 1997, the Face, Legs, Activity, Cry and Consolability (FLACC) scale, designed to evaluate postoperative pain in young children, was one of the most frequently used scales. The FLACC scale scores pain intensity by rating five behaviors on a 0–2 scale; face, legs, activity, consolability, and cry, resulting in a maximum score of 10.5–7

A preprogrammed injection type was selected on the control unit and while performing the procedure the heart rate and blood pressure were also recorded. Immediately after the injection, the child’s pain perception was assessed by the Modified Child Dental Anxiety Scale (MCDAS) and Face, Legs, Activity, Cry, Consolability (FLACC) Behavioral Scale. After assessing the pain by self-report measures, the heart rate and saturated oxygen rate (SpO2) were measured by a pulse oximeter.

The data was analyzed using a statistical package for the social sciences version (SPSS) 17.0 for Windows. The level of statistical significance was set at 95% (P = 0.05). The results of the present study were subjected to statistical analysis to interpret the differences between groups using paired t-test.

Fifteen children, with a mean age of 6.93, were subjected to both the comfort control system and the insulin injection technique. The statistical analysis showed a non-significant difference in the mean heart rate before and after local infiltration, but a significant difference (P = 0.002) was seen during local infiltration (Table 1). There was no significant difference in SpO2 level found throughout the procedure in both groups (Table 2). The mean value of the face, legs, activity, consolability, and cry scale (FLACC) was higher in the insulin group throughout the procedure (Fig. 1). The mean value of the modified child dental anxiety scale (MCDAS) was higher in the insulin group (Fig. 2). Overall results observed that the comfort control system showed better performance in reducing anxiety level and pain as compared to the insulin syringe. 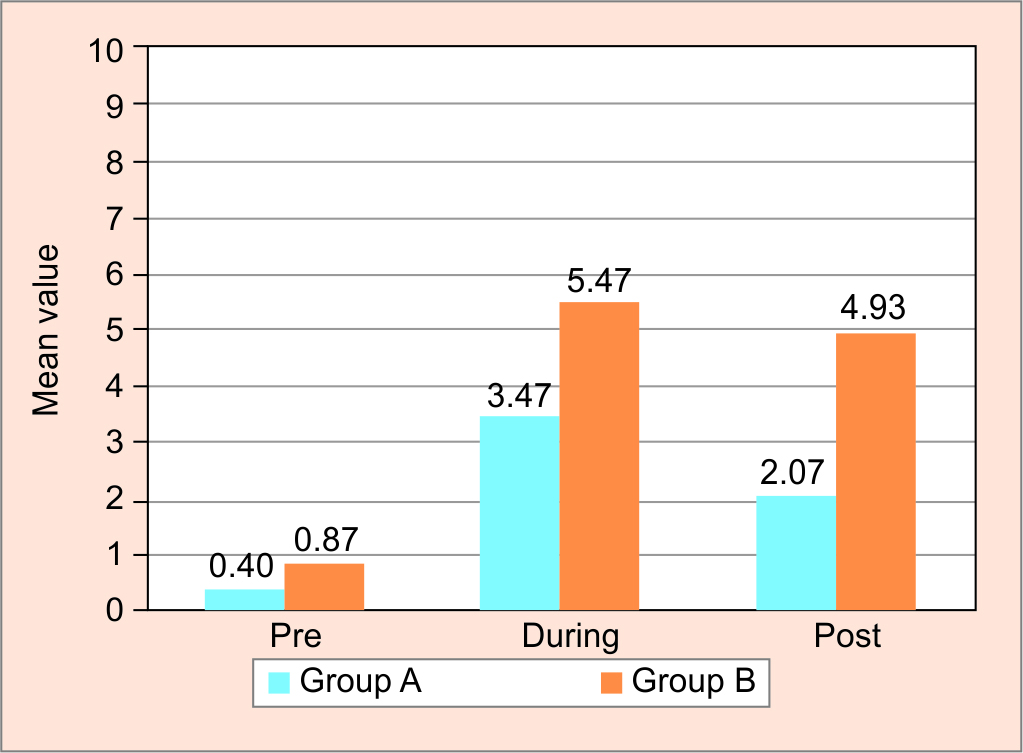 Fig. 1: Compared the FLACC scale score between the Group A (comfort control injection system) and Group B (insulin syringe system) 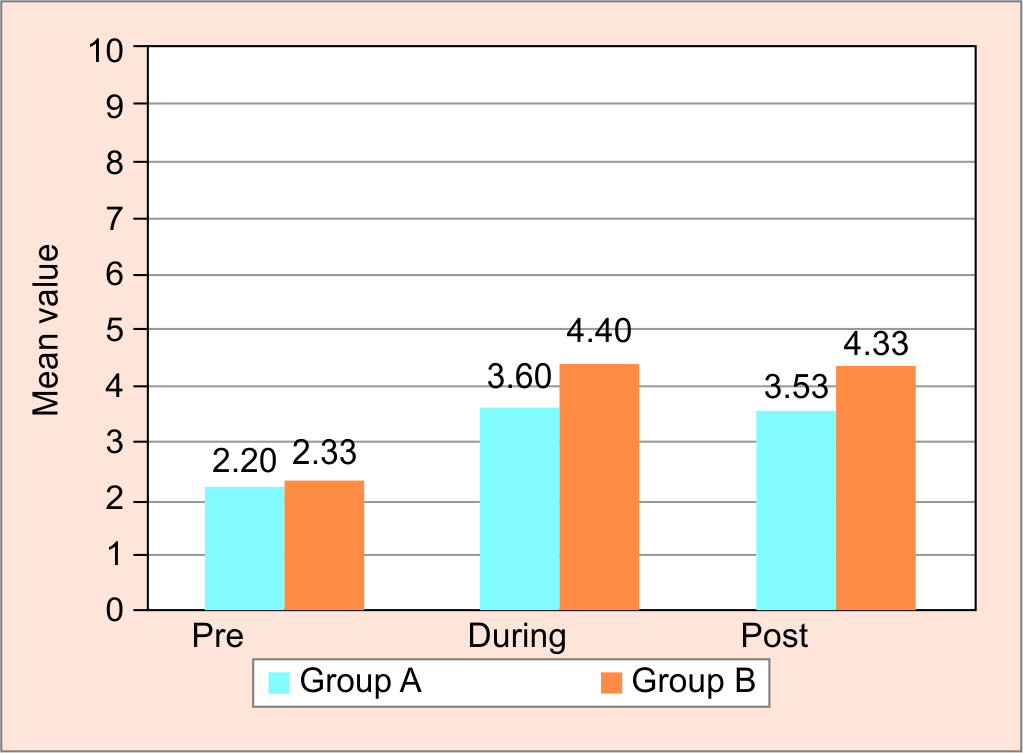 Fig. 2: Compared the “MCDAS” score in between the Group A (comfort control injection system) and Group B (insulin syringe system)

In dentistry, anesthetic agent administration is thought about as the most painful and anxiety-provoking procedure for both children and adults. Pain during an injection is usually caused by the needle penetrating the skin as well as the solution deposited in the target tissues. Pain during injection may be influenced by the gauge of the needle.1

Infiltration technique has been used in the present study because of various factors like a direct vision of the practitioner on it, less penetration depth of needle, easier application, less technical errors, fewer amounts of anesthetic solution, and shorter duration of being anesthetized and might be used as an alternative to block.1

According to Malamed, there was a growing trend toward the use of smaller-diameter (higher-gauge) needles on the supposition that they were less traumatic to the patient than needles with larger diameters.8 As a result, an insulin syringe with 30 gauge diameters and an 8 mm ultra-short needle, as well as a comfort control device with 30 gauge diameters and a 25 mm needle, were used in the current study. Ghasemi et al.9 observed a significant difference concerning pain when 27 and 30 gauge needles were used and said that 30 gauge needles exhibited clinical advantage when used to give inferior alveolar nerve block in children. Asokan10 concluded that the pain due to injection penetration may be controll using thinner gauge needles. Whereas, some authors like Fuller et al.11 and Lehtinen12 observed no significant differences in pain perception using different gauge needles.

Vemula et al.14 and Langthasa et al.3 observed that anxiety and pain were significantly less in the computer group compared to the traditional method of anesthesia injection. A similar result was obtained in the present study when compared with an insulin syringe. In the studies by Gibson et al.15 and Tahmassebi et all6 each child was assigned to either computerized or conventional techniques and they found that computerized techniques produced significantly less disruptive behavior when compared to a conventional technique.

Gurpreet Kaur et al.1 observed that insulin syringes showed less pain perception when compared with a traditional syringe. When compared to the insulin syringe, the comfort control device produced a better response and reduced anxiety levels in the current study.

The comfort control system showed better results because of its pen-like grasp of the handpiece that allows the operator to maintain a more gentle and controll manipulation of the needle. So minimal force is needed throughout the administration and a slow rate of anesthesia delivery dose appears to reliably reduce the pain-related disruptive behavior in young children.3

Therefore, the comfort control system seems to be an effective alternative to any other syringe system-traditional syringe or insulin syringe.

Limitations of the Study