The goal of early treatment in class III malocclusion is an attempt to modify the growth pattern and to provide scope for future growth. It reduces the complications like the gingival recession in relation to mandibular incisors,6 improves dental and facial esthetics,7 eliminates anterior functional shift of the mandible,8 and decreases the chances of later orthognathic surgery.9 In children with active growth, orthopedic treatment is usually carried out to obtain maximum skeletal and minimum dental changes. In this article, we present two case reports relating to early orthopedic management of class III malocclusion with rapid maxillary expansion (RME) and facemask therapy.

A 9-year-old boy reported to the Department of Pediatric and Preventive Dentistry with the chief complaint of backward placement of upper front teeth. The patient had no relevant past medical or dental history and no abnormal habits were present. Extraoral examination of the face (Figs 1A and B) revealed the mesocephalic shape of the head, concave facial profile, anterior facial divergence, and acute nasolabial angle. All functional examinations were normal. Intraoral examination showed no soft tissue abnormalities. The patient was in the mixed dentition stage with associated constriction of the maxillary arch. The molar relation was a super class I on the right side and class I on the left side. There was an anterior skeletal and dental crossbite of upper permanent incisors with respect to lower permanent incisors and primary canines causing a reverse overjet of 1 mm and overbite of 5 mm (Figs 1D to F). Clinically missing tooth #85, erupting #34, and tooth-colored restorations on tooth #54 and #75 were noted.

Composite cephalometric evaluation (Fig. 1C) was done because the patient was in the mixed dentition stage. The values obtained are shown in Table 1, the patient had a class III skeletal base (ANB−3° and Wits appraisal−4 mm) with the retrognathic maxilla (SNA 87°) and average growth pattern. The patient also had anterior dental crossbite.

A 9-year-old girl reported to the Department of Pediatric and Preventive Dentistry with the chief complaint of a large lower jaw. Pre/postnatal history and family histories were not significant. No history of deleterious habits was present. Extraoral examination of the face revealed concave facial profile, anterior divergence, deficiency in maxillary growth (Fig. 2). All functional examinations were normal. Intraoral examination showed that the patient was in the mixed dentition stage with an anterior crossbite, bilateral posterior crossbite, and class III molar relation on both sides. Dental caries was seen in tooth #85. Eruption bulge was noted in tooth #22 region. No abnormalities were noted in the swallowing pattern. 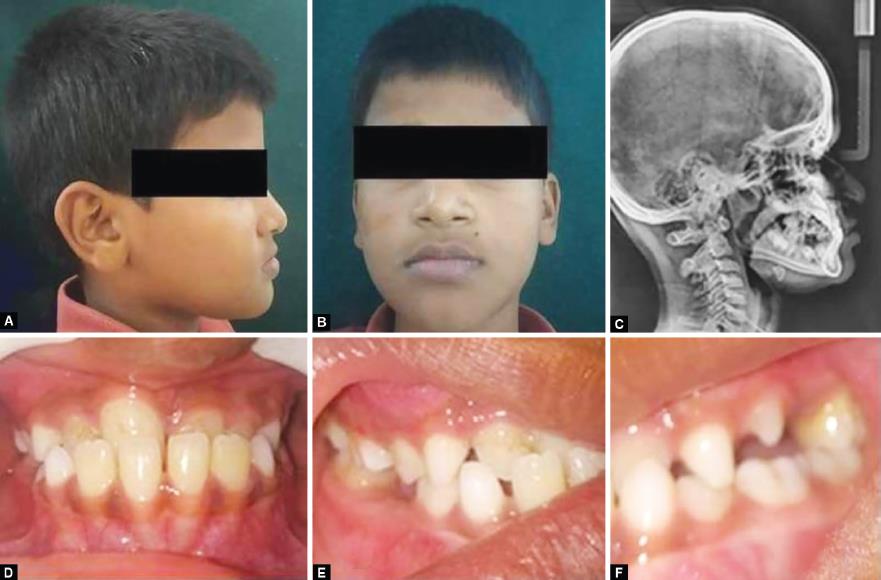 Figs 1A to F: Pretreatment images of (A and B) Facial profiles; (C) Lateral cephalogram; (D to F) Intraoral dental findings

Composite cephalometric evaluation (Fig. 2) was done because the patient was in the mixed dentition stage. The values obtained are shown in Table 1. The patient had skeletal class III malocclusion (ANB−2° and Wits appraisal−6 mm) with the retrognathic maxilla (SNA 81°) and average growth pattern. The patient had retruded maxillary incisors and protruded mandibular incisors.

The treatment objectives for both cases were:

Figs 2A to C: Pretreatment images of (A and B) Facial profiles; (C) Lateral cephalogram 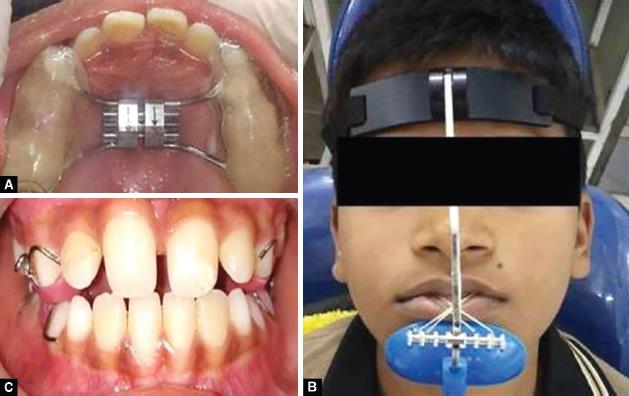 Rapid maxillary expansion device was fabricated using a Hyrax screw (Leone, Italy). The appliance was cemented and activated one-quarters turn every 12 hours for 10 days for Case 1 and 21 days for Case 2. After the disjunction of the mid palatine suture and expansion of the maxillary arch, a Petit facemask was adjusted and placed to rest on the forehead and the chin of the patients (Figs 3 and 4). Elastics (5/16 inch by 14 ounces) were worn from hooks located 2–3 cm in front of the lips to the intraoral attachments located on the expansion appliance, approximately at the gingival level of the canine. The force generated by the elastics was 600–800 g bilaterally and were instructed to wear the appliance for 13–14 hours daily.

In Case 1, disarticulation of the maxilla and palatal expansion was achieved within 10 days using the bonded RME appliance, but the device was maintained for the next 4 months to promote maxillary protraction and to limit unwanted tooth movement. A positive overjet of 2 mm was achieved after 5 months (Fig. 5). The bonded RME device was then removed and replaced with a removable reverse twin block appliance for protraction stability and as a retainer (Fig. 3). The facial and dental changes seen in this clinical case are shown in Figure 5, pre- and post-treatment cephalometric changes seen are shown in Table 1, Figures 6 and 7. The therapy used resulted in correction of the maxillomandibular skeletal relationship (increase in average Wits appraisal −2 mm and ANB 0°), as a result of anterior displacement of the maxilla (increased SNA 88°) and clockwise rotation of the mandible (increased FMA 23°). Thus, rapid anterior crossbite correction was achieved satisfactorily (Fig. 5).

Figs 4A to E: (A and B) Rapid maxillary expansion appliance; (C and D) An arch expansion achieved with the opening of mid palatine suture; (E) Petit face mask 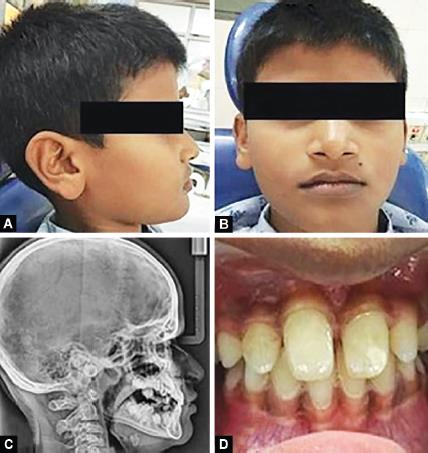 Figs 5A to D: Posttreatment images of (A and B) Facial profiles; (C) Lateral cephalogram; (D) Intraoral image of teeth in occlusion 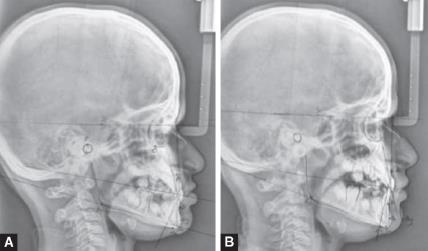 Figs 6A and B: Pre- and posttreatment comparison of cephalometric changes seen in Case 1 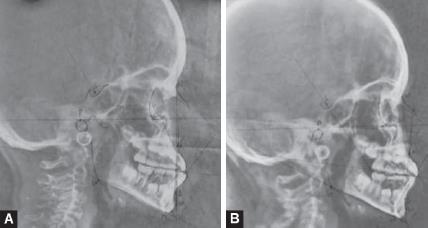 Figs 7A and B: Pre- and posttreatment comparison of cephalometric changes seen in Case 2

In Case 2, arch expansion was achieved in 21 days (Fig. 4). Positive overjet with class I molar relation, improvement in facial profile was achieved after 6 months. But the device was maintained for another 5 months to achieve overcorrection. The facial and dental changes seen in this clinical case are shown in Figure 8, pre- and post-treatment cephalometric changes are shown in Table 1, Figures 6 and 7. The combination therapy of RME and facemask used in the present case resulted in correction of posterior crossbite and sagittal maxillomandibular relation (increase in average Wits appraisal +1.7 mm and ANB 3°). Post-treatment, forward movement of maxilla resulted in increased SNA angle to 85°. Anterior crossbite correction was achieved satisfactorily.

Figs 8A to H: Posttreatment images of: (A) The arch; (B to D) Correction in over-jet and molar relation; (E and F) Facial profile changes; (G) Lateral cephalogram

Skeletal or dental discrepancies may result in class III malocclusion which can be a cause for esthetic and functional impairments. The most common orthopedic treatment protocol for class III malocclusion is RME and facemask therapy.10 This therapy induces a combined effect on both maxillary and mandibular components. Either a pre-pubertal or pubertal phase of growth and development is the optimal time for the orthopedic approach to manage class III malocclusion.11 Maxillary protraction is generally considered to be stable and a success rate of 66–75% has been reported.12–14 Bengi et al. used a bite block type device with Hyrax screw placed parallel to mid palatal suture to carry out successful distraction osteogenesis in premaxilla.15

It is widely accepted that the mid-face deficient class III patients should be treated before 7–8 years of age.12 It has been stated that the appliance should be activated for 8–10 days before facemask placement even in patients who do not require any increase in transverse dimension.14 According to Turley,7 rapid palatal expansion “disarticulates” the maxilla, allowing a more positive reaction to protraction forces by initiating cellular response in the circum-maxillary sutures. Protraction headgear and palatal expansion appliance have similar effects on these sutures. For instance, the zygomatic buttress, especially the zygomaticomaxillary suture has been implicated as a major resistance to forces generated by both palatal expansion and maxillary protraction. Baik in 1995 found a significantly greater forward movement of the maxilla when protraction was used in conjunction with RME compared with protraction without RME. Thus, many clinicians have advocated maxillary expansion a week before starting facemask therapy, even without maxillary constriction, crowding, or posterior crossbite. Therefore in our Case 1, we used bonded type of palatal expansion for a short duration of 10 days as it disrupts the maxillary suture system and promotes maxillary protraction. This bonded rapid palatal expansion appliance also limits unwanted tooth movements and it did not produce any over-correction or scissor bite in our Case 1.

Thus, in Case 1, the maxilla moved downward and forward as a result of the protractive force. Effectively, the mandible rotated downward and backward and improvement was noted in a maxillomandibular relationship in the sagittal dimension. In Case 2, the posterior crossbite was corrected within 21 days. Maxilla moved forward and downward, improving the sagittal intermaxillary relationship. The molar relation was corrected from class III to class I. Similar results were seen in the case reports published by Ishii et al.2 and Ngan et al.13 In both Cases 1 and 2, the skeletal and soft tissue profile was straightened and the posture of the lips improved. Thus, the treatment of class III malocclusion should be initiated in the mixed dentition to have maximum skeletal changes. However, in some of these patients, unfavorable horizontal mandibular growth can occur. Such patients might require orthognathic surgery in adulthood.