Dental anomalies affecting the teeth are relatively common. Simultaneous occurrence of multiple dental abnormalities in a set of teeth is uncommon and relatively rare. This paper aims to report the novel case of dens evaginatus as a covert expression of incisor supernumerary. Also, the use of cone-beam computed tomography (CBCT) for topographic inference is emphasized for routine use for it justifies the sufficient cost-to-benefit ratio.

Each tooth is explicitly recognizable by its unique anatomy, albeit with no statute of limitations on malformations that are oft-quoted in literature. Teeth present in excess of normal series are called supernumerary teeth and the same can occur either unilaterally or bilaterally, in permanent or primary dentition, and in the maxillary or mandibular region.1 The rarely reported dens evaginatus (DE) is an odontogenic developmental anomaly that can be defined as a tubercle or protuberance from the involved surface of the affected tooth consisting of an outer layer of enamel, a core of dentine, which may contain a slender extension of the pulp tissue.2 The cusp de facto resembles an eagle’s talon,3 but it could also present as pyramidal, conical, or teat like.3–5 According to Davis and Brook,5 an additional cusp that prominently projects from the lingual surface of primary or permanent anterior teeth, is morphologically well-delineated and extends at least half the distance from the cementoenamel junction to the incisal edge. A multifactorial genetic-environmental etiology is postulated, though the exact mechanism of formation is not known.

Dens evaginatus, as tubercle on the occlusal surface, is easily detected radiologically, but the pulp horn cannot be seen because of the superimposition of the enamel.6 The overlapped and submerged multilobed supplementals, as in the present description imposed another constraint. The covert expression of incisor supernumerary as DE is reported here, unveiled bilaterally on cone-beam computed tomography (CBCT). Tooth morphology can be visualized in three dimensions; from this point, CBCT has been suggested to assist in identifying all of the dental anomalies.7

A 12-year-old apprehensive female patient was referred for an orthodontic consultation to the FacesNBraces Dental Research Institute, New Delhi because of the presence of bubbling gums (Fig. 1A) and absence of a usual front set of teeth. No abnormalities in developmental growth or pertinent history of trauma were noted. She showed all conspicuous and non-carious permanent teeth on examination, except for both upper central incisors. An intraoral bulge was observed on the attached gingiva in (Fig. 1B) 11 and 21 regions, affiliated with a pair of tiny multi-pyramidal dentoid structures. The negative pulp sensitivity and deepened sulcus on periodontal probing were ruled out first.

Figs 1A and B: Intraoral clinical view: (A) Frontal view; (B) Occlusal view

The X-ray finding was reckoned to be an unerupted single-rooted tooth with open apex (Fig. 2) along with 3-lobed (1 labial and other 2 lingual) supplemental. Next, the internal anatomy was evaluated on CBCT (Pax-i3D Green, Vatech, Korea) (Fig. 3) with exposure parameters of 105.0 kVp, 8.0 mA, 7.20 seconds. Images were acquired around the patient’s head with a slice thickness of 0.15 mm. The acquired data were studied by combining sagittal, coronal, and axial CBCT images (Figs 4 and 5) by applying multiplanar reformatting (MPR) to depict the maxilla.

We evinced the presence of pulp tissue inside the buccal tubercle of both unerupted maxillary central, thus delineating the DE. The multibracket appliance treatment was suggested, with the goal of Angle’s Class I occlusion and corrected front teeth with canine guidance. However, no tooth was planned for extraction initially. Unfortunately, the patient could not be followed up due to a lockdown in the nation.

Today, we are fortunate to be in the era of digital imaging in dentistry. Even before attending to the oral health of patients, the clinician’s first responsibility is to recognize a disease, whether it is in the mouth or other parts of the body. An additional responsibility is to know what to do when anomalies are identified in the oral cavity. Early diagnosis and management of DE is important to prevent a variety of clinical problems, such as, stagnation of food, caries, periapical lesions, other soft tissue irritation, breastfeeding problems, compromised esthetics, and occlusal interference, which may lead to accidental cusp fracture, displacement of the affected tooth, irritation of the tongue during speech, and mastication.8

The prevalence varies from 1 to 4%, and the mongoloid and the Neo Asiaties racial groups are commonly affected but have also been observed in Chinese and Caucasian people.9 In our case, the patient was of North Indian origin, with a reported prevalence of 7.7%.10 The reported prevalence of DE in the population is given in Table 1. Furthermore, it can be isolated or an integral part of syndromes;11 identified as Sturge–Weber, Mohr, Rubinstein–Taybi, Incontinentia pigmentia chromians, and Ellis–van Creveld syndromes. Dens evaginatus is thought to originate from an abnormal proliferation and folding of the inner portion of the enamel epithelium and subjacent ectomesenchymal cells of dental papilla into the stellate reticulum of the enamel organ during the bell stage of tooth formation.12 The resultant supplemental solid elevation on the crown is described to be in varying contours.6,8,9,11,12

Figs 4A and B: CBCT axial images 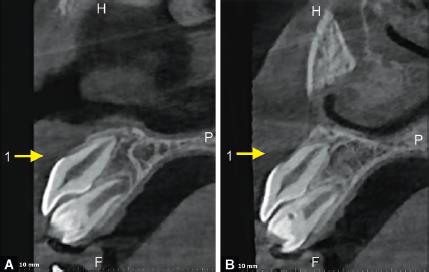 Figs 5A and B: Multiplanar reformatting (MPR)—sagittal view

The pragmatic approach in the collation of previous data was two-dimensional X-ray interpretation of the condition. The evaluation is misleading when the enamel of teeth shows superimposition in intraoral X-rays. Alike in our case, the determination of the relationship with peripheral structures in three different planes is beneficial for diagnosis. The introduction of CBCT has allowed the reconstruction of slices with judgment from contemplating sagittal, transverse, and frontal planes, hence to obtain better information about the internal anatomy of these teeth7,8 and better information allows for more predictable treatment plans.11,12 Numerous authors have distinctively exposed the association of DE along with dens invaginatus, mesiodens, in multiple shapes and forms, and in fused version. Except for the paltry PubMed accountabilities,8,12,13 this developmental variant was seldom studied by CBCT radiology earlier. The magnetic resonance tomogram technique seems to have the future potential for topographic visualization and was utilized in one such case,14 though was not used by us for the lack of means. The limitation for its routine use is the insufficient cost-to-benefit ratio.13 Our disclosure is unique as the palatally positioned submerged DE were observed, coincidentally with unerupted central incisors unlike those in the above-mentioned records. It was worthwhile on CBCT to project the negative outcome on existing dentition in particular and facial profile, as a whole for the patient.

In pedodontics, the teeth with unusual structures continue to manifest as DE, either as a single entity or as varying combinations. Many cases were hitherto reported on traditional radiographs in literature. Cone-beam computed tomography has an edge over them and was shown as valuable to accurately assess the morphology by internal anatomy in our patient.

The authors certify that they have obtained an appropriate patient consent form. In the form, the patient/parents’ have given their consent for the images and other clinical information to be reported in the journal. The patient understands that the names and initials will not be published and due efforts will be made to conceal the identity, but anonymity cannot be guaranteed.