Materials and methods: The study was done on 40 primary molars randomly divided into four groups of 10 teeth. Samples were subjected to CBCT scan and image analysis before instrumentation, following which the teeth were instrumented with respective endo files. Post-instrumentation CBCT scan was done and volume of the canal was measured from CEJ to apex. The obtained values were statistically analyzed to find the level of significance using mean, standard deviation. Statistical analysis was further done using one-way ANOVA and a post hoc test.

Conclusion: It can be concluded that rotary files, mainly One Shape and Kedo-S files can be used as an acceptable instrument in roots of primary teeth as it shows the least root dentin removal.

Endodontic treatment in primary teeth is considered challenging and often time-consuming especially during canal instrumentation. Hand instruments such as K files, reamers, and H files were traditionally used to prepare the body of the canal. The manual endodontic techniques have shown to cause failures like ledging, zipping, and apical blockage.1 Pediatric endodontics has advanced much in recent years with the use of rotary instruments, thus allowing a faster and efficient treatment option in root canal therapy. The recent advances are directed toward root canal preparation techniques with various nickel-titanium rotary instruments.2 They are consistent in preparing progressive taper with the original anatomy of the root canal and are found to stay better centered within the canal with fewer elbows and ledges compared to hand instrumentation with stainless steel endodontic instruments.3

Conservation of the dentinal structure is vital in preventing the fracture of endodontically treated teeth. Checking the volume of the root canal space is vital to understand the amount of tooth material removed by endodontic treatment.4,5 This study compares the volume of root canal space using ProTaper rotary instruments, One Shape rotary systems, Kedo-S file system instruments with manual K-files.

The main advantage of using cone-beam computed tomography (CBCT) for endodontic procedures is that it can provide 3-D views with specific root canal morphology which intraoral and panoramic radiography cannot provide.6 The uniqueness of this study is that no previous study has been conducted to compare these instruments in primary root canals. Hence, the purpose of this study was to compare and evaluate the volumetric changes of root canal thereby, the efficiency of cleaning and shaping of these rotary file systems using CBCT.

The study sample consisted of 40 primary molar teeth extracted for therapeutic reasons. Institutional ethical committee approval was obtained before the study. The teeth were collected, handled, and preserved according to the Occupational Safety and Health Administration (OSHA) guidelines.7 Inclusion criteria of the samples were primary molar teeth with at least 2/3rd of the root intact. The tooth with any previous attempt of pulp therapy or failed root canal treatment and tooth with signs of pathological resorption were excluded. Access cavities were prepared with no. 4 round bur after which irrigation of root canals and pulp chamber were done with saline to remove the debris. The patency of the root canal was determined with a 10 size K-file. As the tip of the K-file was visualized at the apex, the final working length was recorded 1 mm short of the measured length. The collected teeth were numbered and randomly divided into 4 different groups of 10 teeth each. Group I for Hand K-file, group II for ProTaper Gold files, group III for Kedo-S files, group IV for One Shape files.

The teeth were subjected to scanning using cone-beam computed tomography before instrumentation. After that, all samples were instrumented with respective files for their groups by a single operator. The specimens were then viewed from CEJ to apex under high resolution both in cross-section and longitudinal section with a thickness of 0.125 mm/slice and 120 kVp and a 360° rotation. The total volume of the root canal from CEJ to the apex was obtained by using ITK-SNAP software, Statistical Package for Social Sciences (SPSS) version 16.0 was used for analysis. The values of preoperative and postoperative root canal volume were recorded and the difference in canal volume in all the samples was calculated (Table 1). The data were expressed in mean and standard deviation, ANOVA (post hoc) Dunnett’s t-test and paired t-test were done to find the statistical significance between the groups. p < 0.05 was considered statistically significant at 95% confidence interval.

Applying the permanent molar rotary instrumentation protocols for primary molars instrumentation leads to the lateral perforation on the inner root surface, more so in curved roots of the primary molar.8,9 Kuo et al.10 stated that rotary Ni-Ti files can be safely and efficiently used for root canal preparation in primary molars. The literature search does not show any clear guidelines for the instrumentation of primary teeth root canals with rotary files. CBCT has been used in this study the volume of root canal space by various files. Previous research studies by Musale and Mujawar11 and Selvakumar et al.12 have successfully used CBCT for measurements for instrumentation of the root canals and have proved it to be a non-destructive and reproducible tool.

While cleaning and shaping in primary tooth maintaining the remaining dentin thickness is important as there is a direct correlation between the root thickness and the fracture resistance.3,4 Lim and Stock13 have suggested that a minimum 0.3 mm thickness of canal walls should remain after canal preparation, which allows adequate resistance against lateral and occlusal forces. As the amount of dentin removal indicates the aggressiveness of the instrument, the volume of removed dentin was evaluated in this study.

* p < 0.05 significant compared between the groups 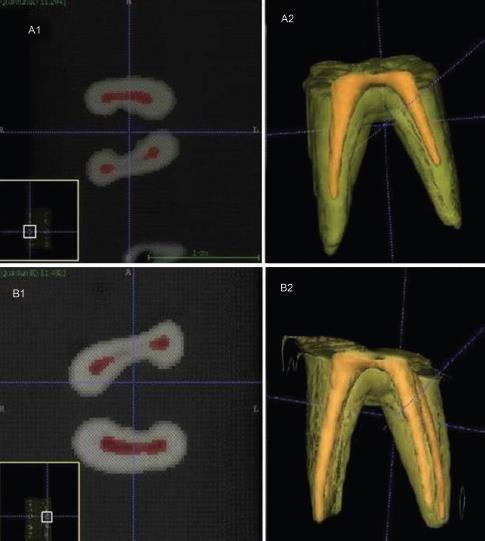 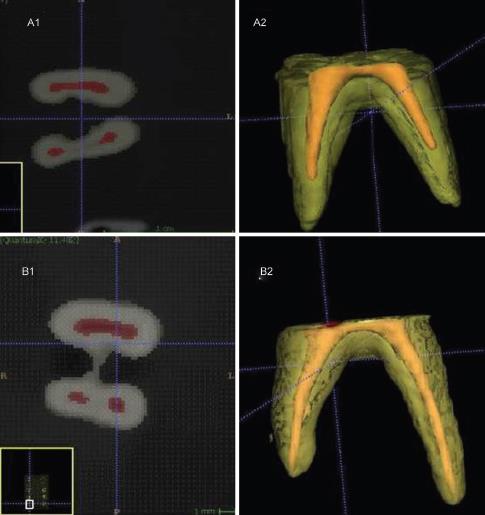 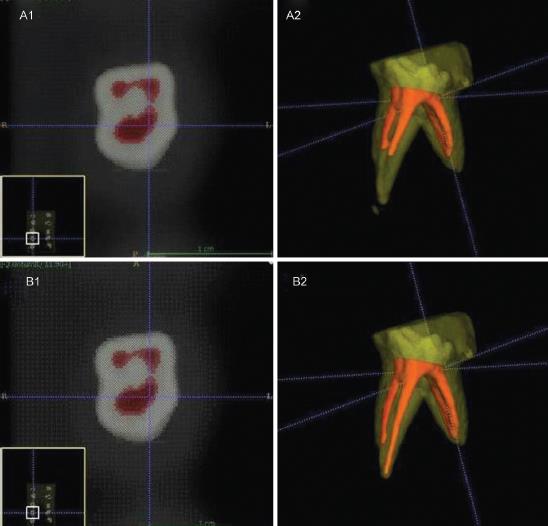 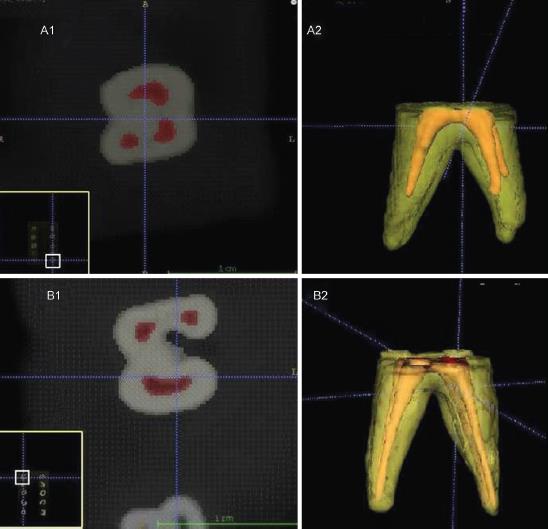 In the comparison of hand K-files with One Shape files, hand K-files removed more dentin. This could be also due to the stiffness of the K-file instrument and multiple files used to prepare the canal. On contrary, One Shape files is a single file system and they have a favorable design at the tip, and its cross-sectional design characterizes three symmetrical cutting edges. While in the middle part, the cross-sectional design progressively changes from a three-cutting edge design to two cutting edges. The results of our study about the dentin removal efficacy of K-files are in accordance with studies conducted by Rashid and Saleh16 and Saleh et al.17

With ProTaper Gold has progressively changing helical angle and pitch. The sharp cutting edges with convex triangular cross-sectional design along with its flute design combines multiple tapers within the shaft up to 19%. The variable tip diameters help for aggressive cutting and hence the excessive volume of dentin removal. The results of our study are in accordance with various studies.18–20

Lesser removal of dentin by Kedo-S files may be due to the gradual taper of these files which helps in easy coronal enlargement and also for straight-line access. Gradual tapering helps in effective canal shaping and avoids the instrumentation of root canals.21

In the present study, it was observed that there was a significant statistical difference in pre- and post-canal instrumentation volume between hand and rotary groups. The reason attributed to the increased dentin removal could be due to the tendency to perform more intensive instrumentation by the clinician, resorption pattern of primary molars, and may also because instrumentation time is more for hand filing than rotary files.1,9