Effect of Endodontic Irrigating Agents on Microhardness of Radicular Dentin in Primary Teeth: An In Vitro Study

Introduction: Biochemical debridement with an irrigating solution is indispensable to remove microorganisms, debris flushing, and smear layer from a passage of the root canal, thus involving the use of many irrigants. Along with the desirable effects, these agents may have some detrimental effects on dental hard tissues.

Aim and objective: To evaluate the effect of different irrigating solutions on the microhardness of radicular dentin of primary teeth.

Results: There was a statistically significant difference in the microhardness values of radicular dentin before and after irrigation with the different agents. More reduction was seen with the CA (24.62 ± 6.43) group when compared with 1% sodium hypochlorite with 10% EDTA group (33.09 ± 6.93) (p = 0.001).

Conclusion: Citric acid, although an acid belonging to the organic category, acts as a chelating agent like that of EDTA, thus bringing about a significant reduction in microhardness of radicular dentin in primary teeth.

Thorough debridement and cleaning are as necessary for endodontic treatment as in any surgery. Effective endodontic treatment is accomplished by cleaning, shaping, and complete the disinfection of the root canals.1 A myriad of compounds in aqueous solutions lead to the removal of the smear layer that helps improve the fluid-tight seal.2 The complex morphology of the canal system of deciduous teeth makes their instrumentation a challenging process. Therefore, a significant role is played by these irrigating solutions in eliminating microorganisms, dissolution, and removal of tissue debris, including the smear layer.3 Normal saline (NS), sodium hypochlorite (NaOCl), ethylene diamine tetraacetic acid (EDTA) and its various mixtures, and citric acid (CA) are frequently used as irrigating solutions in primary teeth.4

Although NaOCl is used as a regular standard irrigating solution due to its increased antiseptic and antibacterial effect, as revealed by the studies that it is not adequate to dissolve the inorganic element of the smear layer of root dentin in primary teeth. The chelating agent EDTA is used to chiefly dissolve the inorganic elements of the smear layer in deciduous teeth. Therefore, combined use of irrigating solutions is advocated for usage as it helps in the removal of all the elements of the smear layer.5

Citric acid, which is an organic acid, is known as an agent that aids in the elimination of the inorganic quantity of the smear layer, and hence 6% dilution of CA was used additionally in deciduous teeth, as the smear layer was very precisely eliminated at this percentage dilution. Usage of CA in deciduous teeth is generally accompanied by a lower amount compared with permanent tooth studies.5

Approval was attained by the Institutional Ethical Commission following which the study was carried out. Ethical no-IERBC/2016-19/19.

Thirty freshly extracted human primary teeth (anterior and posterior) were indicated for extraction only after clinical and radiographic examination. After extraction, only those teeth have been considered which have a minimum root length being standardized to 6 mm of either root post-extraction therefore there is no pre- and postoperative radiograph. The length of the root has been measured using a digital vernier caliper so only those teeth which had a root length of 6 mm or more were considered in the study, others were excluded.

Teeth that were fractured or calcified or that were previously root canal treatment were excluded.

Each tooth was decoronated at the cement enamel junction and the roots were sectioned buccolingually and root halves were then buried in acrylic with the dentin facing upward (Fig. 1).

Three separate indentations were made at the cervix, middle, and root apex of dentin in each sample at pulp dentin interface with a Vickers diamond indenter (Japan) (Fig. 2) each using 200 g load and a 10-second dwell time. Pretreatment microhardness value was calculated so that mean baseline Vickers hardness number (VHN) could be obtained which was then converted into microhardness values.

Specimens were divided into three groups of 10 specimens each (n = 10) using the Research Randomizer software using the lottery system.

Group I—EDTA and sodium hypochlorite group—In this, the specimens were treated with 10% EDTA and 1% sodium hypochlorite for 3 minutes. Few drops of the irrigants were applied using a disposable syringe continuously on the flattened smooth dentinal surface. 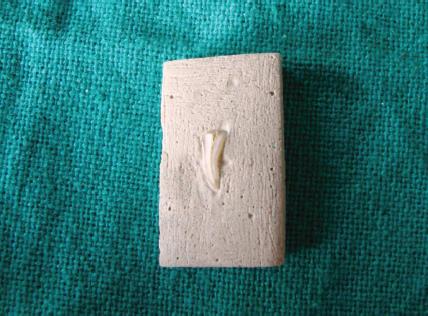 Group II—CA group—In this, the specimens were treated with 6% CA which was applied using a disposable syringe continuously on the flattened smooth dentinal surface for 3 minutes.

Group III—NS group—In this, the specimens were treated with saline which was applied using a disposable syringe continuously on the flattened smooth dentinal surface for 3 minutes.

Specimens were then rinsed in distilled water and blotted dry. Vickers hardness number was again recorded, as described before, for each specimen, and the change in microhardness values was calculated.

When the two groups were compared with each other, a statistically significant difference was found between them. Citric acid caused a greater percentage reduction in dentin microhardness than EDTA used with sodium hypochlorite. Intergroup and intragroup comparisons of the values between the two groups pretreatment and posttreatment showed this reduction to be statistically significant. However, it was seen that group III did not affect the microhardness of the primary radicular dentin (Table 1).

Studies to evaluate the changes in microhardness of radicular dentin after using irrigating agents have been carried out in the permanent teeth but similar changes in primary dentition have not been reported.

No available records were seen on microhardness and modulus of elasticity of hydrated primary dentin. In a study done by Angker et al. in the year 2003, microhardness and elastic modulus of primary dentin were found to be 0.52 + 0.24 to 0.91 + 0.15 and 11.59 + 3.95 to 17.06 + 3.09 grade point average (GPa), respectively. The current outcome has been started using the Knoop hardness method.7 In the present study, the mean values for the hardness of radicular dentin of primary teeth were found to be 50.91 + 13.566 VHN at baseline.

The combination of EDTA and sodium hypochlorite together increases the effect of chelation by uplifting the pH and generating a basic atmosphere in which EDTA has a greater attraction for calcium ions.8 Ethylene diamine tetraacetic acid acts in reaction with the calcium ions in dentin and causes the formation of soluble calcium chelates. Consequently, by allowing cleaning and removal of diseased tissue, it further adds to the abolition of microorganisms in the root canal system.9 Ethylene diamine tetraacetic acid solution due to its chelating action brings out an aversive unstiffening on the calcified constituents of dentin and subsequently a decline in the microhardness.10 Hariharan et al. showed that EDTA when used as an irrigating solution in the root canal system in primary teeth, although it caused the removal of the smear layer but adversely affected the dentinal tubules.8

Citric acid is a weak organic acid and a chelating agent. The latest studies bring more data about the effective performance of the weaker solutions of CA (6–19%) and that is the reason for considering 6% CA solution in this study.9

The utmost efficacious irrigating solution was found to be the CA due to its ability of efficient removal of the smear layer. In the research stage of this study, no similar studies have been established in the literature. In unchanging clinical conditions, as in accordance with the outcome of the present study, it is measured that elimination of the complete components of the smear layer will escalate the subsequent success amount of root canal treatment in primary teeth.

The irrigating solution sodium hypochlorite (NaOCl) has been used independently or in relation with other drugs. NaOCl acts like a cleanser thus allowing the elimination of remains from the root canals by causing albumin denaturation11 Sodium hypochlorite when used in a concentration varying from 0.5 to 5.25%; acts as a powerful antimicrobial solution, and efficiently liquefies pulpal remnants and biological constituents of dentin.12

A similar study by Chibber et al. in the year 2020 was conducted to evaluate the effect of two irrigating solutions on microhardness of radicular dentin of primary teeth where they found out that more reduction was seen with CA when compared with EDTA with statistically significant difference (p = 0.001). The present study related to the outcomes of this study by Chibber et al.13

The use of these agents on permanent teeth is advantageous. Similar effects on primary teeth may be undesirable. Primary teeth have a much reduced radicular dentin thickness. The average thickness of dentin in primary teeth is 0.52 ± 0.24 GPa. Smear layer removal in primary dentition may lead to a greater reduction in microhardness of dentin, and this ultimately leads to a loss of mechanical properties of the tooth thus decreasing the strength of the tooth.7

Primary dentin mechanical properties are dependent on its position within the tooth. The hardness of primary dentin deteriorates in proportion to its distance toward the pulp and this is likely to reflect in both the mineral content and the histopathological structure of dentin. Hence, dentin immediately surrounding the pulp canal would be expected to have a reduced hardness when compared with dentin closer to enamel/cementum.7

It can be assumed that reduction in microhardness might lead to faster resorption of roots, thus causing earlier exfoliation of primary teeth. It is thus recommended that additional studies should be conducted on finding the outcome and long-term effect of these irrigants on the primary teeth.

It was observed that the application of these irrigating solutions negatively affected the microhardness. The substantial alteration in dentin microhardness after the irrigation treatment indicated the effects of these chemical solutions on the composition of dentin structure.

Root canal irrigating solutions affect the structural characteristics of the hard dentinal layer. All irrigating solutions that are CA and EDTA and sodium hypochlorite used for primary teeth in the study have reduced the microhardness of the radicular dentin when compared with pre-treated radicular dentin. Citric acid produced a greater reduction in microhardness when compared with EDTA and sodium hypochlorite and the results so obtained were statistically significant.