Assessment of Knowledge, Attitude, and Practices about Early Childhood Caries among Postgraduates of Healthcare Professional Courses in Belagavi City: A Questionnaire Study

Aim and objective: The aim and objective of the study was to assess the knowledge, attitude, and practices about early childhood caries (ECC) among postgraduates of healthcare professional courses of Belagavi city.

Materials and methods: A sample of 400 participants were divided into four groups: dental, medical, homeopathy, and Ayurveda. An 18-item validated questionnaire containing four domains of professional demographic data, knowledge, attitude, and practices was distributed among the participants. The data collected were statistically analyzed.

Results: The descriptive analysis was used followed by Chi square for association and one-way ANOVA for comparison followed by the Karl Pearson correlation coefficient for determining the correlation between knowledge, attitude, and practices of postgraduates. The results were found to be highly statistically significant when correlation was done between knowledge, attitude, and practices among the postgraduates of healthcare professional courses (p < 0.0001).

Clinical significance: The findings that we get from this study are helpful in gauging the knowledge, attitude, and practices about ECC among postgraduates of healthcare professional courses in Belagavi city, which will help us to recommend the respective governing bodies to include ECC in their curriculum and train them, which will help in reducing the prevalence of ECC.

Conclusion: The study concludes that there is a need to increase the level of knowledge, attitude, and practices among postgraduates of healthcare professional courses about ECC.

Globally, dental caries is claimed to be the most common chronic disease of childhood. Although dental caries has been declining around the world, the problem of early childhood caries (ECC) has remained unchanged in many parts of the world, especially in the socially deprived population.1 Dental caries that affects the dentition of preschool children (<71 months of age), which may even start as soon as the first primary tooth erupts, is referred to as ECC. The primary teeth are mainly responsible for a child’s general health, speech development, aesthetics, and self-esteem, thus it is important to prevent and treat caries-affected teeth at the earliest. Children experiencing ECC may experience pain while eating, and thus, they are often underweight. Correspondingly, it has been seen that children having poor oral health also demonstrate poor school performance by almost 2.3 times.2

Young children and their parents visit pediatricians and primary care physicians in the initial period. The newborns and young children are generally examined in their early years of life by them, when prevention is critical and enduring behaviors are to be established; thus, these appointments must be considered as prospects to upsurge awareness about oral health evaluations and refer children, who are at caries-risk, to dental care.6 General practitioners, thus, must identify the necessity for and profits of early examinations so that they can commence their pivotal role in prevention of ECC.7 A considerable number of studies have been carried out in order to evaluate the knowledge, awareness, and referral practices for ECC among primary healthcare providers of the medical field, but very few have been conducted among other healthcare professionals. So, the aim of this study was to assess knowledge, attitude, and practices about ECC among the postgraduate students of dental, medical, homeopathy, and Ayurveda of Belagavi city.

A cross-sectional, descriptive questionnaire study was conducted in the Department of Pediatric and Preventive Dentistry, KLE VK Institute of Dental Sciences, KLE Academy of Higher Education and Research, Belagavi. Ethical approval was obtained from the institutional review board (Sl. No.1283) and permission to conduct the study was taken from the respective institutions from where sample were to be collected. STROBE guidelines were followed for our study. Simple random sampling was used in our study. Sample size of 326 was calculated using standard sample size formula and previous studies, which was rounded to 400.1 Study population included postgraduate students pertaining to various specialties, which were dental (93), medical (170), homeopathy (120), and Ayurveda (70). Subsequently among them, the participants who have given their consent from dental except pediatric postgraduates (93), medical (144), homeopathy (109), and Ayurveda (54) healthcare professional courses were included in our study.

Eighteen questions were obtained from different published articles1,6,8 and were modified covering the aspects required for this study. A pilot study was conducted and an Alpha Cronbach coefficient of 0.82 was calculated to test the reliability of the questionnaire. The questionnaire consisted of four components. The first component asked the participants to provide their professional demographic data, the second dealt with the knowledge of ECC, the third dealt with the attitude, and the last component was the practices of referral followed for prevention of ECC among healthcare professionals. The response to all the questions were measured on five-point Likert scale: “Strongly agree,” “Agree,” “Neutral,” “Disagree,” and “Strongly disagree.”

In the present study, all the 400 participants returned their forms and there were no dropouts. The study included 39.75% male and 60.25% female. The mean age of the surveyed professionals was 25.43 years (Table 1).

The association between different demographic profiles of students with levels of knowledge, attitude, and practices in the prevention of ECC was analyzed using the Chi-square test (Table 2). It was seen that all the professionals had low knowledge, attitude, and practices, which was statistically significant (p < 0.0001). A questionwise response of the participants for 18 questions has been tabulated on the five-point Likert scale (Table 3).

The comparison of knowledge, attitude, and practice among the postgraduates of four healthcare professionals was done using the one-way ANOVA test (p < 0.05); it was found to be statistically highly significant (p < 0.0001) (Fig. 2).

The correlation between the knowledge, attitude, and practices in prevention of ECC was done using the Karl Pearson’s correlation coefficient and it was found to be statistically highly significant (p = 0.0001) (Table 4) (Fig. 3).

Early childhood caries is a form of dental caries that usually affects the preschool children and may start as soon as the first tooth erupts in the oral cavity. When left untreated it results in pain and potential life-threatening infections that ultimately deteriorate the overall quality of life of a child, hence the preliminary need at this hour is primary preventive strategies for good oral health, which should be put as an essential priority in public health. 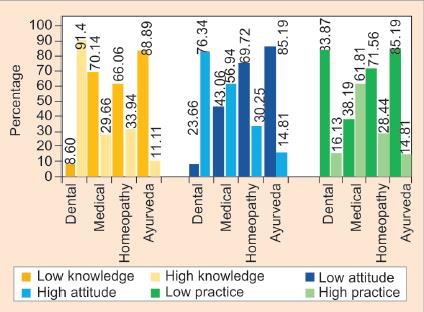 Fig. 1:: Association between type of course and levels of knowledge, attitude, and practice of ECC by the Chi-square test 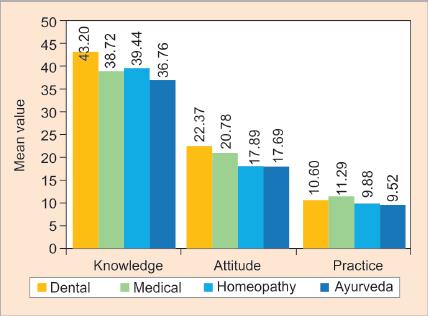 Fig. 2:: Comparison of types of courses with mean knowledge, attitude, and practice scores prevention of ECC by the one-way ANOVA test

Children in their early ages are brought to the physician often more than a pediatric dentist, thus physicians play an important role in providing essential information about oral health care to the parents and also to the children at their young age. In Indian population, there is an inclination toward the use of Ayurvedic and homeopathic medicine. In a study conducted by Jawla et al., 48% of the people preferred Ayurvedic treatment and 17% preferred homeopathic treatment for common ailments. In cases of emergency, 50% people preferred the use of allopathic medicine.9 Thus along with dental, a common effort put by medical, Ayurvedic, and homeopathic healthcare professionals is necessary to prevent ECC at preliminary stages. The American Academy of Pediatric Dentistry guidelines on infant oral health recommend that all other healthcare professionals who serve parents and infants should provide education on the etiology and prevention of ECC.10 Thus, there can be large improvement in access to dental health education and referral practices to a pediatric dentist if child oral health disease prevention and promotion strategies are incorporated into all healthcare professionals’ curriculum.

A similar study was conducted among undergraduate students by Olatosi et al.,8 which stated that 32.6% of the respondents agreed that a child’s first visit to the dentist should be on or before the age of 1 year, whereas in our study only 28% of the respondents strongly agreed; 81% of respondents in our study agreed that putting babies to sleep with a bottle containing infant formula/breast milk can predispose to ECC; the results were comparable to this study in which about 74.4% agreed.8

One more study was conducted by Gaddam et al.11 on knowledge and attitudes on early childhood oral health among medical and dental graduate students. About 57.14% of the final-year dental students knew the recommended age for child’s first dental visit, which was quite higher as compared to the results found in our study, which was only 28%.

A research was conducted by Prathima et al.12 regarding awareness, attitudes, and practices of pediatricians regarding ECC and infant oral healthcare of children in Puducherry; 39% of them were cognizant about maternally derived Streptococcus mutans. Similar to our study, this study also emphasized information as well as training on infant oral health care.

Indira et al.13 piloted a research to study the knowledge, attitude, and practices of the pediatricians toward infant oral health care. The study showed that most of them were less aware of the first dental visit and ECC, which was a parallel finding in our study. All pediatricians agreed that both medical and dental professionals together are accountable for infant oral health care, which was also found in our study. A team work as well as appropriate education and training is necessary for enabling them to provide caries risk assessment and preventive oral health services, which will be advantageous for the children.

In support to the findings of our study, a cross-sectional study was conducted among pediatricians and family physicians in Riyadh city by Alshunaiber, which stated that the participants’ practice was lower (42.6%) compared with their attitude (86.1%) and knowledge (65.3%).14

Family healthcare physicians tend to play a vital role in prevention of ECC because they are the ones who primarily interact with young children before dental professionals come into role. Thus, there is a need to create more awareness among medical, Ayurvedic, and homeopathic healthcare professionals and their postgraduates about ECC.

The findings that we get from this study are helpful in gauging the knowledge, attitude, and practices about ECC among postgraduates of healthcare professional courses in Belagavi city, which will help us to recommend the respective governing bodies to include ECC in their curriculum and train them, which will ultimately help in reducing the prevalence of ECC.

Thus, from this study the following conclusions can be drawn:

Majority of the participants were not aware about ECC.

LIMITATIONS OF THE STUDY