A supernumerary tooth represents a tooth that is excess or additional to the natural series. They can be found anywhere in dental arches but often located in maxillary anterior region. The presence of these in oral cavity may lead to certain complications like impaction, delayed or ectopic eruption of adjacent teeth, which may further lead to crowding, midline diastema, and eruption into the floor of the nasal cavity. Therefore, proper management is of utmost importance to avoid these consequences. This article emphasizes the role of early orthodontic treatment in managing complications associated with supernumerary.

A supernumerary tooth—the name itself suggests an extra tooth in addition to normal number of teeth present in oral cavity.1 Although, they may be found in any region but most commonly appear in maxillary midline region.2 They may be found as a single or multiple entity, unilateral or bilateral, and impacted or erupted.

Their pesence is associated with disruptive eruption of permanent teeth in 28–60% of cases and they are present in 0.8% of primary dentitions and in 2.1% of permanent dentitions.3 Among sexual prevalence, males (62.2–87%) are on higher sides than females.4 In Caucasian, this range varies in-between 1% and 3%.5 Chinese (3.4%)6 have higher prevalence than Japanese (2.7%).7

Four types of supernumerary teeth have been reported in the literature:8

As mentioned earlier, their presence is associated with many consequences; one is follicular cyst formation which may lead to significant bone destruction and root resorption of permanent incisors.9,10 Therefore, surgical removal is indicated as a preventive measure. It has been found that many developmental disorders are associated with supernumerary teeth like Ellis-Van creveld syndrome, Tricho-Rhino-Phalangeal syndrome, cleft lip and palate, and Gardner’s syndrome, etc.

A 12-year-old male patient complained of malaligned teeth. Medical and family history was not remarkable. On inspection, a supernumerary tooth (tuberculate) was present palatal to 11 displacing the later in labial direction (Fig. 1A). However, on analyzing radiographically, an unerupted mesiodens was also seen (Fig. 1B). Treatment was planned to remove both the supernumeraries (Fig. 1C), followed by orthodontic alignment. Initially, orthodontic treatment consisted of banding of 16, 26, and bonding rest of teeth with edgewise bracket initiating with NiTi 0.014 (Fig. 1D). On further follow-ups with subsequent alignment sequence of NiTi were shifted to stainless steel. The treatment goals were achieved in 18 months without any complications (Fig. 1E).

A 9-year-old boy complained of unerupted upper front tooth. Intraoral examination revealed unerupted 12 (Fig. 3A). On radiographic examination, it was found that the supplemental tooth is present distal to the unerupted 12 (Fig. 3B). It was decided to surgically remove the supplemental tooth after taking the informed consent (Fig. 3C) and wait for the spontaneous eruption of 12. Patient was kept on the regular follow-up, and after 12 months, tooth spontaneously erupted into the oral cavity without any sign of complication (Fig. 3D). 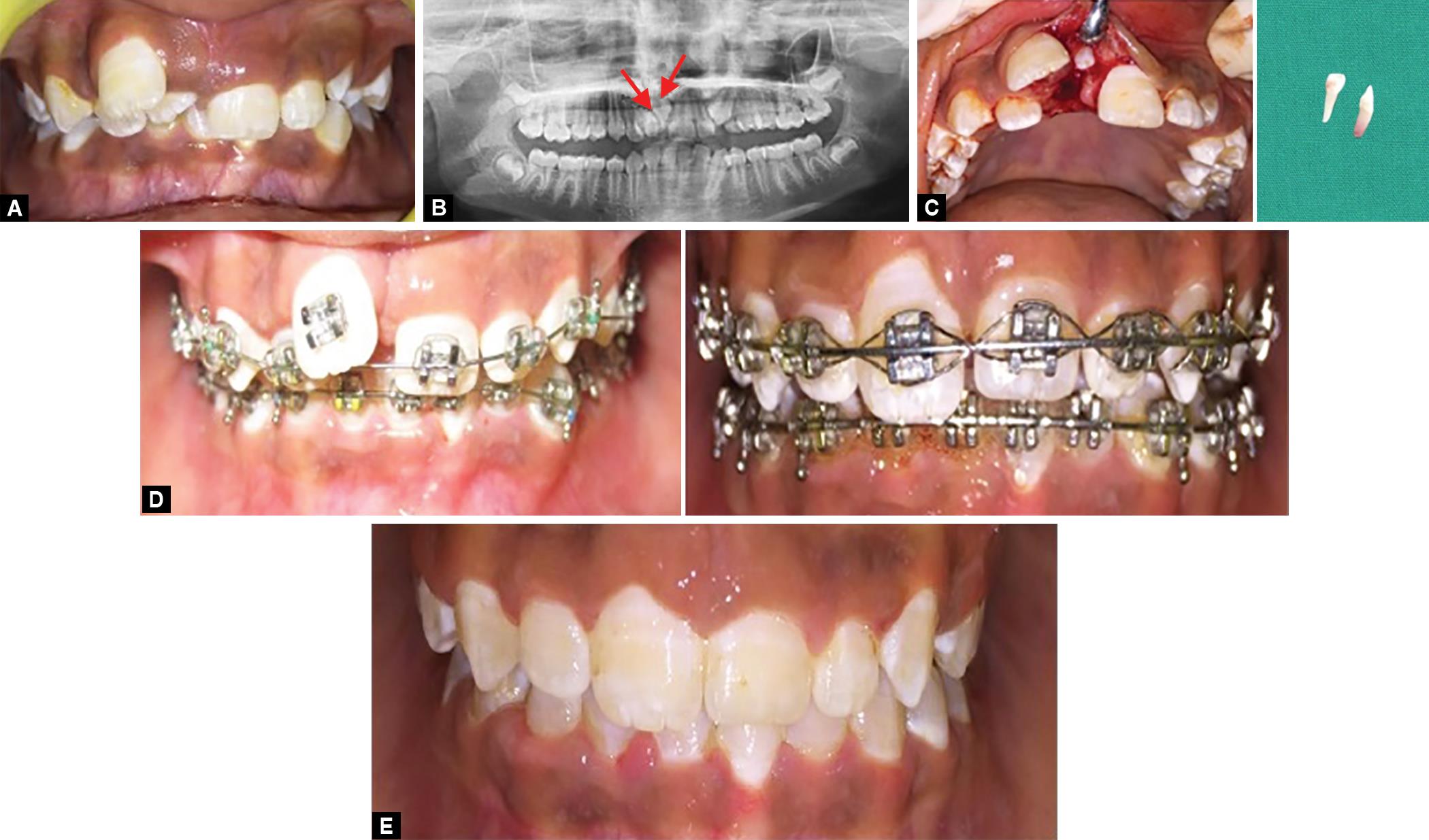 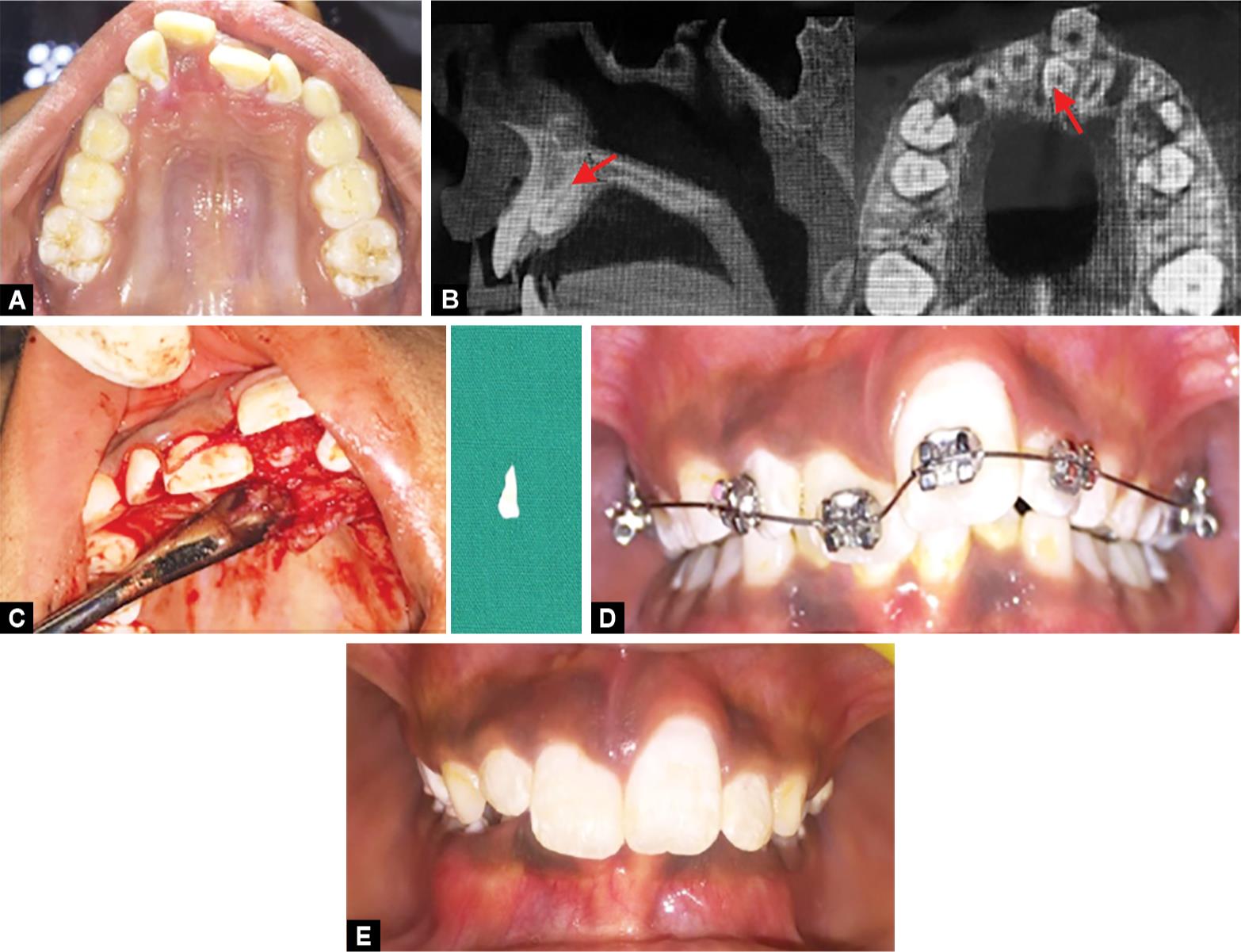 A young male patient of 12 years presented with malaligned upper front teeth. Medical, dental, and family histories were noncontributory. On intraoral examination, a mesiodens was found which deviated 21 labio-cervically (Fig. 4A). In addition, rotation of 11 was also found. Radiographic examination showed presence of two supernumerary, one is conical supernumerary palatal to 21 and another is inverted apico-palatally to 11 (Fig. 4B). After taking informed consent, both the supernumeraries were surgically extracted (Fig. 4C) subsequent to which upper full arch was orthodontically treated for malalignment (Fig. 4D) and space closure (Fig. 4E). Complete alignment and space closure of upper arch were achieved in 12 months.

Multiple supernumerary teeth (in the absence of any syndrome) may be found mostly in the anterior maxilla (Yusof et al.)11 and are mostly observed in an inverted position (Tay et al.).12 In the present cases 1, 2, and 4, complication associated with the supernumerary teeth was malalignment, which became the reason for the esthetic concern to the patient. So, extraction followed by orthodontic alignment was performed.

However, Ashkenazi et al.14 enumerated certain parameters which governed the spontaneous eruption of an impacted tooth after extraction of a supernumerary tooth or odontoma, which included distance between the apex at actual and estimated positions of the impacted tooth, long axis angle of impacted tooth relative to the midpalatal suture, nolla stage of root formation of the supernumerary tooth, total number of supernumerary teeth (3 or more), time from first surgery to the eruption time of the impacted teeth, and amount of space loss. Treatment of supernumerary teeth involves various opinions especially regarding the optimal timings of removal.15 Some suggest removal immediately after diagnosis to prevent abnormal eruption pattern, eruption potential, and loss of space, etc., while others favor deferring surgery until roots of the neighboring incisors are completely formed because it may damage, devitalize, or malform the adjacent teeth and might be futile if complications will not develop in the future.15 However, Koch16 stated that immediate removal of supernumeraries is not necessary if no pathology is present. Erupted supernumeraries should be preferentially extracted except in cases where the supernumerary teeth need to be retained. Supernumerary can either be removed alone or with immediate orthodontic traction of unerupted tooth. Gomes et al.17 verified that the preferred treatment was surgery followed by orthodontic therapy (62.0% cases). Also, the systemic review by Wasserman-Milhem et al.18 reported that there was no effect on root length or shape when fixed orthodontic forces were applied on immature teeth. Moreover, apical resorption was proportional to treatment duration irrespective of closure of root apices. In the presented cases, supernumerary teeth resulted in multiple degrees of orthodontic problems like crowding, delayed eruption of permanent incisors, rotation, and displacement resulting in their surgical extraction followed by orthodontic alignment of malaligned permanent teeth. However, Hamilton and Gutmann19 observed that apex may close early if orthodontic forces are applied on immature apices. The most common complications related with the supernumerary is owing to interference (eruption and normal alignment of the adjacent teeth) caused by supernumerary may result in diastema, loss of vitality, displacement, impaction, and malocclusion.

The simultaneous presence of supernumerary and diastema formation is rarely observed and occurs in 28.6% of cases.20 Also, the deleterious effect of supernumerary cause by displacement has been observed in 28–63% of cases, with 82% of involved teeth displaced in labial direction.17 Likewise, altered normal eruption pattern has been reported in 81.1% of cases21 and poses a challenge to the clinician for its proper management.

In the above-discussed cases, supernumerary teeth resulted in esthetic and functional issues, which necessitate their surgical extraction. After removal of supernumerary, it is essential to orthodontically align the malpositioned teeth for better functional and esthetic purposes. Early interceptive treatment during mixed dentition with 2 by 4 or 2 by 6 results in prevention of malocclusion at an earlier stage, improve self-esteem of the patient, reduce cost of treatment, and prevent or minimize the chances of future orthodontic treatment.

As the prevalence rate increases, complications associated with supernumerary also increases. Therefore, the clinician should thoroughly study the clinical and radiographic presentations of these anomalies to implement appropriate management in order to avoid malocclusion. Interceptive orthodontic treatment during early mixed dentition phase not only help in eruption of impacted tooth but also manage and prevent the developing malocclusion.

5. Cherrik HM. Radiology in the diagnosis of oral pathology in children. Pediatr Dent 1982;3:424.

8. Howard RD. The unerupted incisor. A study of the postoperative history of incisors delayed in their eruption by supernumerary teeth. Dent Pract 1967;17(9):332–342.