Results: The prevalence of dental caries was found to be 73.7% with a mean Decayed missing filled teeth (DMFT) and decayed missing filled teeth (dmft) of 1.15 ± 1.71 and 1.38 ± 2.27, respectively; the differences between gender were statistically not significant (p value > 0.05). Around 68% of children were in need of preventive care, and 52.5% children needed one surface filling. Around 84% of children had moderate gingivitis. The mean gingival index score was 1.20 ± 0.15; the difference between gender and age groups was statistically not significant (p value > 0.05). Dental traumatic injuries were observed in 2.8% of children. Developmental defects of enamel were observed in 13.8% of children. Angles’ class I malocclusion was prevalent in 28.1% of children. High caries activity was observed in 61.4% of children.

Children with special healthcare needs (CSHCN) have been reported to have high unmet oral healthcare needs. Despite high prevalence of oral health diseases in this group of children, the oral health remains a low priority with their family.1 A total of 26 million people globally and 1.2 million children in India have special healthcare needs as per Census 2011.2 Children with hearing and speech impairment constitute one of the major population groups of CSHCN. Population-based surveys in 2011 in India using the WHO protocol estimated the prevalence of hearing impairment among children to be 18.9% of all the disabilities.2

Children with hearing and speech impairment have been reported to have neglected the oral health status, than their normal counterparts,3,4 despite high prevalence of dental caries (40–55%),5,6 gingival diseases (49.6%),7,8 and dental traumatic injuries (14%).9 This is because of the inability to listen to the oral health instructions, to express their problems to the dental practitioner, and the lack of proper training/reluctance of dental practitioners to manage such children.10 The dental caries status and gingival health of hearing/speech impaired children have been studied in various regions of India.5–8 However, only limited data exist in the literature regarding developmental defects of teeth,11,12 malocclusion,13 and caries activity in such children in India.

The present study was thus planned to assess the prevalence of dental caries and its treatment needs, gingival health, traumatic dental injuries, developmental defects of enamel/other developmental anomalies, malocclusion, and caries activity of hearing and speech impaired children from the schools of National Capital Territory (NCT) of Delhi.

A cross-sectional study was planned and a total of 360 hearing and speech impaired children aged 6–16 years from three schools of Delhi were evaluated. Delhi is located at 28.61°N 77.23°E and lies in Northern India. The three selected schools were government institutions under Government of NCT, Delhi, from which permission was sought to carry out the study. The minimum age was selected as 6 years due to late diagnosis of such disability and due to less awareness of such special schools for hearing and speech impaired children where these children are taught by the communication approach by professionals. This age also allowed the recording of the knowledge attitude and practice (KAP) questionnaire and oral diseases across a wide spectrum of children. The sample size was calculated according to a study by Jain et al.5 For sample size calculation with 95% of confidence, precision of 0.04, and assumed prevalence of 0.2, estimated sample size calculated was 354. Thus, a sample of 360 hearing and speech impaired children was enrolled in the study. The enrollment of children in these schools comprises of students, ranging from nursery to eighth grade. The ethical clearance was taken from the Institutional Ethics committee prior to start of the study (Ref no. NK/1784/MDS/13562-63, dated September 24, 2014). Children with partial or complete and unilateral or bilateral impaired hearing were included in the present study. Children with known systemic diseases/syndromic children associated with hearing and speech impairment and uncooperative children were excluded. An informed consent was taken from principals of respective schools and director, Government of NCT, Delhi (Letter no. F82/130/Misc/ADIII/DSW/08/1463, dated May 7, 2014, F82/130/Misc/ADIII/DSW/08/6200, dated June 30, 2014). A single investigator was calibrated till a κ value of >0.8 was obtained (n = 20 children).

The demographic details and oral health status of each child were recorded on a proforma that was filled by the chief investigator. The children were examined using the type III examination procedure14 with the help of teachers for communication with students. Each child was seated in a chair in a comfortable position and under natural day light. A thorough intraoral examination was done for dental caries using the WHO Criteria, 2013,15 and treatment needs using the WHO, 1997 criteria.16 Gingival health was recorded using the gingival index by Löe and Silness (1963).17 Gingival health was recorded on six index teeth, viz., 16, 52, 64, 32, 36, and 44 in mixed dentition and 16, 12, 24, 36, 32, and 44 for permanent teeth with the help of the blunt probe (pocket probe). Recording of trauma to the anterior teeth was done according to the WHO (2013) criteria.15 Malocclusion was recorded according to Angles’ malocclusion (1915) for permanent teeth18 and Baume’s classification (1950) for primary teeth.19 Other parameters like anterior crossbite, posterior crossbite, diastema, increased overjet, and crowding were assessed according to Thilander et al.20 Diastema was recorded for children ≥12 years when discrepancy of >2 mm was observed. Crowding was recorded for incisor and canine premolar segments >3 mm in each jaw. Horizontal relationship of >4 mm between maxilla and mandible was recorded as increase overjet. Developmental defects of enamel were recorded according to the developmental defects of enamel criteria (1992).21 For recording of caries activity, the improved Snyder test described by Alban22 was used because of less time consumption and color changes being more clear than the conventional Snyder test.

After intraoral examination, children were also educated using visual aids and with the help of teachers attending these special schools regarding oral health preventive methods. The data recorded were entered in the computer and analyzed using the SPSS Inc., Chicago, IL, version 16.0 for Windows. Descriptive statistics was calculated for all the quantitative variables. All categorical data were expressed as frequencies, percentages, etc. For numerical variables, the Z test was used for significant testing. For normally distributed data, means were compared using the unpaired t test. All statistical tests were two-sided and a p value of less than 0.05 was considered significant in the present study.

Of the 360 hearing and speech impaired children, 218 children were male and 142 were female. Children were in the age range of 6–16 years (mean: 10.58 ± 2.57) (Table 1). The prevalence of dental caries was 73.7% with the decayed component being the major component of mean DMFT/Decayed Missing Filled Surfaces (DMFS) and dmft/decayed missing filled surfaces (dmfs) highlighting high unmet treatment needs in hearing and speech impaired children. The overall mean dmft and DMFT scores were 1.38 ± 2.27 and 1.15 ± 1.71, respectively. The dmft and DMFT scores did not vary significantly genderwise (p value > 0.05) (Table 2). However, dmft, DMFT, dmfs, and DMFS vary significantly by age groups (p value %3C; 0.001) (Table 2). The caries activity test revealed 61.4% of children (n = 221) had high caries activity (Fig. 1). Preventive treatment in the form of pit and fissure sealants/other preventive care was needed by 67.8% (n = 244) of children. After preventive care, second most needed treatment required was one surface filling (52.5%, n = 189) (Fig. 2). The mean gingival index score was 1.20 ± 0.15. Table 3 revealed that gingival scores did not vary significantly by age group/gender basis (p value ≥ 0.5). Approximately 14% of children suffered from developmental defects of enamel, the most common being diffuse opacities (8.3%, n = 30). Dental fluorosis (8.9%, n = 32) was the most common developmental anomaly followed by molar incisor hypomineralization (6.1%, n = 22). Among the dental traumatic injuries, enamel fracture (1.8%, n = 6) was found to be the most common dental traumatic injury, followed by dentin and pulp involvement (0.9%, n = 3) (Fig. 3). Majority of children in permanent dentition had class I molar relationship (28.1%, n = 101) and in mixed dentition, flush terminal was the most common (3.3%, n = 8), showing statistical difference between two age groups (Table 4).

The American Academy of Pediatric Dentistry defines pediatric dentistry as an age-defined specialty that provides both preventive and therapeutic approach to infants through adolescence including CSHCN.23 Hearing and speech impairment constitutes one of the major components of CSHCN. The present study was carried out in special centers for hearing and speech impairment in NCT, Delhi, due to adequate number of schools (n = 17) and sample size.

The prevalence of dental caries in these hearing and speech impaired children residing in NCT, Delhi, was found to be 73.7%, which was found to be higher than their normal counterparts. Grewal et al. found caries prevalence to be 53% among normal school children aged 6–16 years in schools of Delhi.24 The mean DMFT and DMFS were found to be 1.15 ± 1.71 and 1.74 ± 3.04 in the permanent dentition, and mean dmft and mean dmfs were 1.38 ± 2.27 and 3.45 ± 6.60 in the mixed dentition, respectively. The mean DMFT and dmft for hearing and speech impaired children in India have been reported to be 2.61 and 0.81 by Jain et al.5 and 2.1 and 1.38 ± 2.27 by Singh et al.6 The reasons for such high DMFT/dmft scores in the present study could be neglected oral care, lack of proper communication, lower socioeconomic status, illiteracy, and lack of awareness among parents about oral health. 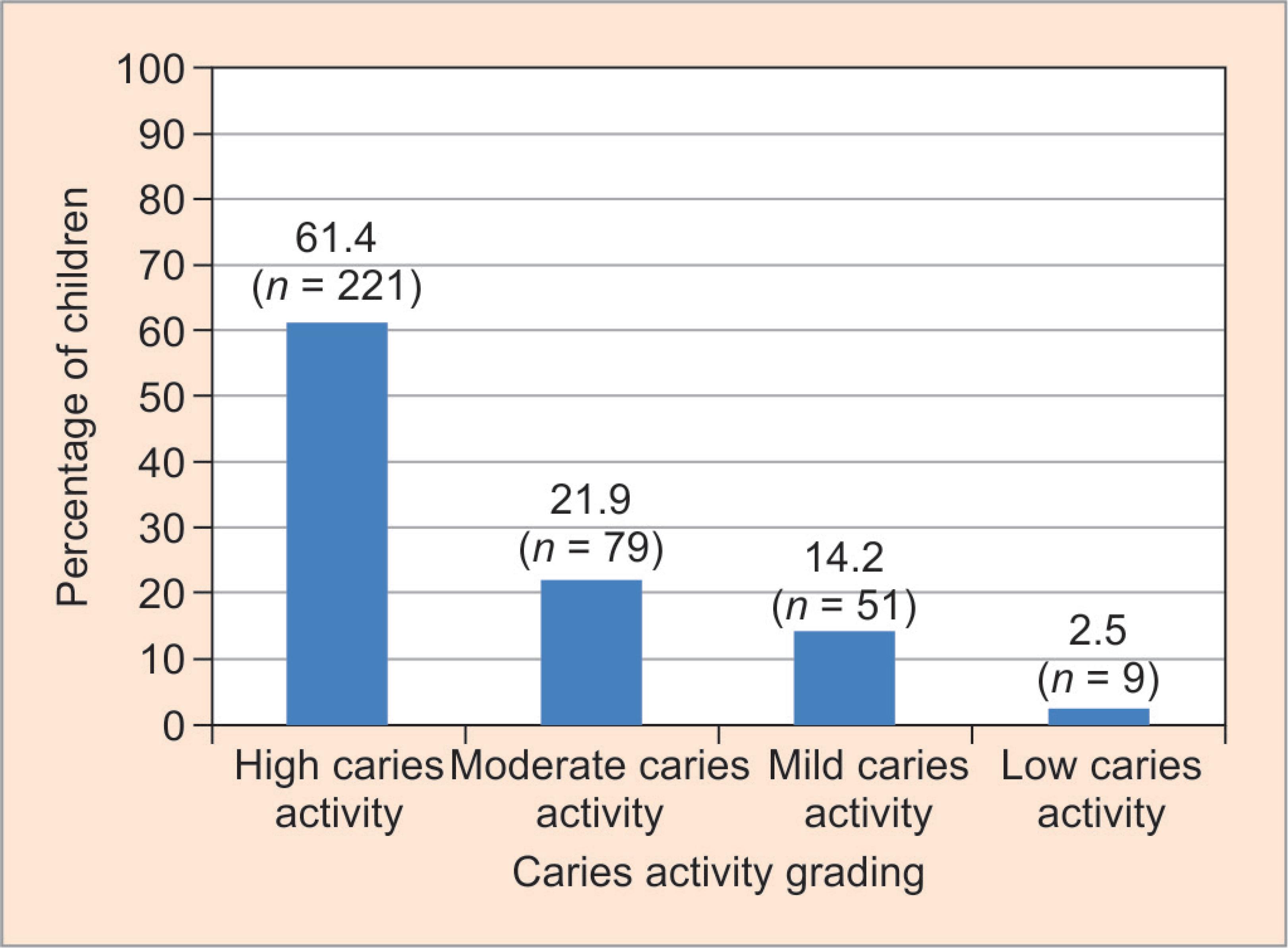 Fig. 1: Distribution of hearing and speech impaired children (n = 360) according to caries activity as per the improved Snyder test

In this study, the improved Snyder test (Alban)22 was used for the evaluation of caries activity in hearing and speech impaired children, because of its simplicity and the ease with which the results can be read. It has a simple procedure of collecting unstimulated saliva by making the patient “drool” directly into the Snyder media. This reflects the change in frequency of consuming anything sweet in a day, which indirectly gets reflected as change in cariogenic microbial counts in saliva. Majority of children had high caries activity (n = 221) indicating higher level of bacterial levels in their saliva due to irregular dietary pattern, hence need for developing a preventive regimen (dietary advice) including application of antimicrobial (povidone iodine) to reduce the microbial challenge.

In the present study, enamel opacities were recorded according to the modified DDE index (1992). Diffuse opacities were the most common in about 8.3% of teeth examined, followed by demarcated opacities in 4.2% possibly due to injury at the time of formation of teeth. Murray and Johnsen28 reported 61.1% hearing impaired children to have developmental defects of enamel whereas Jindal et al.11 observed a prevalence of 56.4% with demarcated opacities being the most common (25.6%) followed by diffuse opacities (18.9%) and hypoplasia (5.1%). The reason for disturbance in enamel formation in such children is the fact that the formation of cochlea and dental enamel occurs at the same time, thus any systemic insult at that particular time could lead to a hearing problem associated with enamel defects.

The most common developmental anomaly observed among the hearing and speech impaired children was dental fluorosis (8.9%) followed by molar incisor hypomineralization (6.1%). Dental fluorosis was more commonly observed in these children as 8.9% of them were residents of South and Southwest Delhi with fluoride concentration in drinking water of 2–4.5 ppm.29 Shyama et al.12 evaluated dental fluorosis among hearing impaired children in Kuwait and found that the overall prevalence was 12.5%. The possible reason for fluorosis in their study was the chronic ingestion of excessive amounts of fluoride through fluoridated water, fluoride in food, dentifrices, etc.

The present study demonstrated a high prevalence of dental caries reflecting treatment needs, high caries activity, poor gingival health, and extensive unmet oral health needs in hearing and speech impaired children. Hence, efforts must be made to encourage the caretakers of these children to promote and improve their oral health.