Dentigerous cyst is the most common developmental odontogenic cyst of the jaw, which apparently develops by the accumulation of fluid either between the reduced enamel epithelium and enamel or between the layers of the enamel organ. However, the mechanism of development of dentigerous cyst has unlit now remains unclear. Such cyst remains asymptomatic initially unless when infected. Management of dentigerous cyst in children needs special considerations because of the presence of developing permanent tooth buds. The purpose of this case report is to describe the diagnosis of dentigerous cyst in a 10-year-old boy that was developed around an unerupted mandibular first permanent premolar and to describe its management with marsupialization to allow the growing tooth associated with the cyst to continue eruption into the oral cavity.

Out of the various varieties of cysts, odontogenic developmental cysts are the ones that develop from epithelial remnants of the tooth forming organ and encloses the crowns of an unerupted tooth. Dentigerous cysts account more than 24% of all the true cyst of the jaw and are the second most common odontogenic cyst after the radicular cyst. Dentigerous cysts are generally discovered accidentally because of the asymptomatic nature of the cyst unless there is an acute inflammatory exacerbation.1 Radiographs show a radiolucent, unilocular lesion with well-defined sclerotic margins characterized by the association with a crown of an unerupted tooth. Complications associated with dentigerous cyst include bone deformities, pathological fractures due to large lesions, loss of a permanent tooth, and development of squamous cell carcinoma.2 Various treatment options have been mentioned in the literature for the management of dentigerous cyst. Two most common treatment modalities used are the following: (1) enucleation for small lesions and (2) marsupialization for large ones.1,2

A 10-year-old boy reported at the Department of Pediatric and Preventive Dentistry with the chief complaint of malaligned teeth. Intraoral examination showed filling with respect to 84 (Fig. 1A). A panoramic radiograph was taken for orthodontic treatment planning, which revealed the presence of unilocular, radiolucent area on the right side of the mandible extending from the distal surface of unerupted permanent canine to the mesial aspect of unerupted permanent second premolar enclosing unerupted permanent first premolar causing displacement of the same (Fig. 2A). The patient’s parents were unaware of this as the lesion was asymptomatic. An informed consent was taken. Aspiration biopsy revealed cystic lesion. Marsupialization was chosen as a treatment option due to the large size and involvement of permanent tooth bud. Surgical intervention was performed under local anesthesia. Extraction of 84 and 85 was done to create a large window. After flap reflection, cystic contents were evacuated and irrigation was done to remove any residual fragment. The cystic cavity was packed with iodoform gauze. The removed surgical specimen was sent for histopathological examination, which confirmed the diagnosis of the inflammatory dentigerous cyst (Fig. 3). The patient was recalled after every 7 days for dressing change to allow decompression and eruption of permanent teeth. The involved permanent teeth erupted naturally, without any traction forces (Fig. 1B). An orthopantomogram (OPG) was done after a 2-year follow-up, which revealed erupted permanent premolars (Fig. 2B). 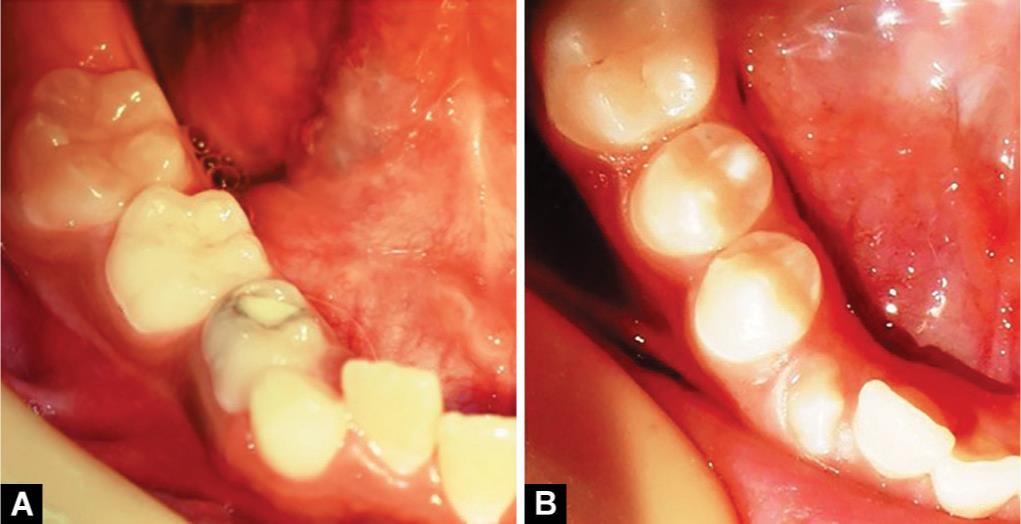 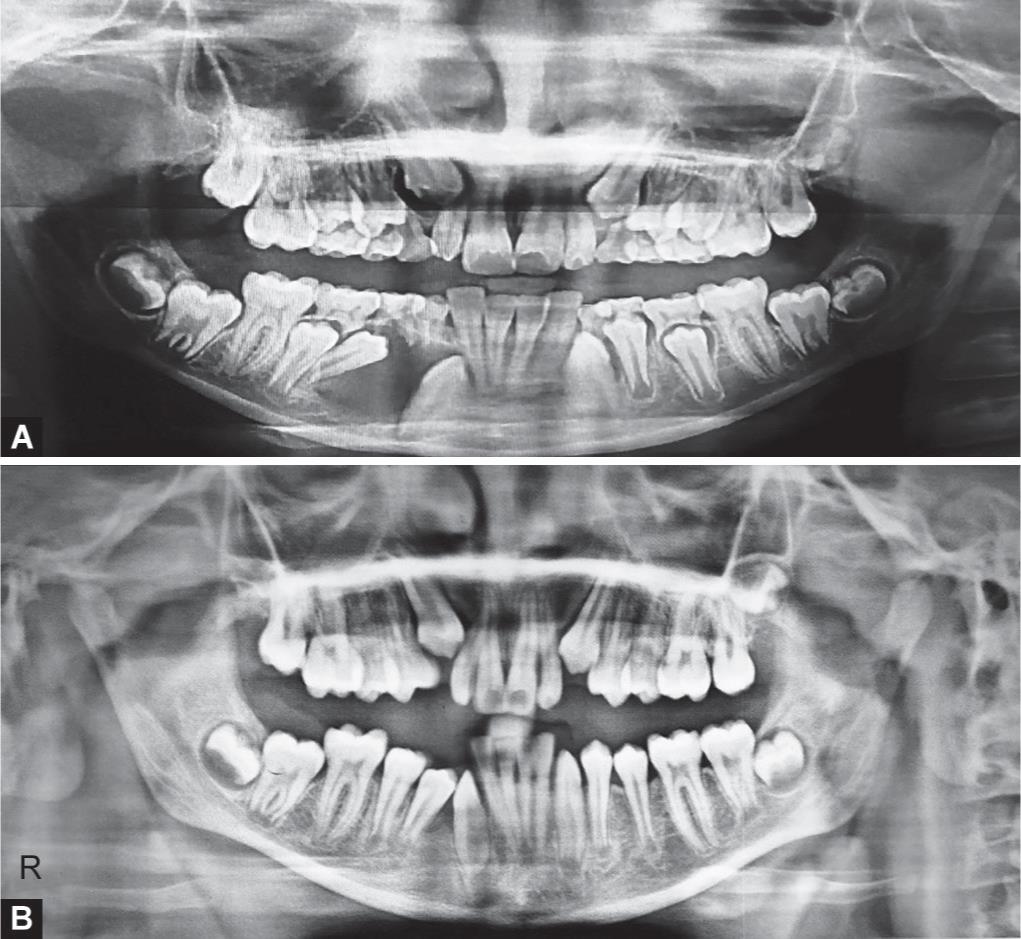 Figs 2A and B: (A) Preoperative OPG showing lesion on the right side of the mandible; (B) Postoperative follow-up OPG showing elimination of lesion and teeth in progressive eruption 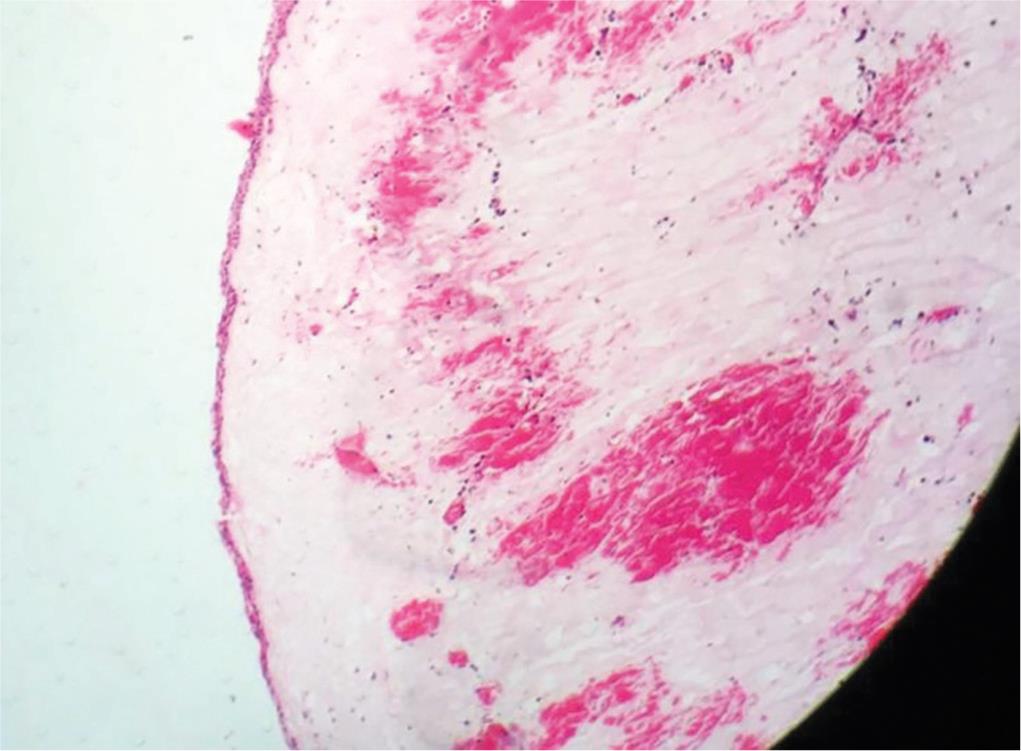 Fig. 3: Histopathological picture of the specimen

Differential diagnosis of dentigerous cyst includes hyperplastic follicles, odontogenic keratocyst (OKC), ameloblastoma, ameloblastic fibroma, and eruption cyst. The normal follicular space is 2–3 mm and a dentigerous cyst can be suspected when the space is more than 5 mm. Dentigerous cysts cause less expansion and less root resorption when compared with OKC. Ameloblastoma shows knife edge root resorption. Radiographically, ameloblastic fibromas mostly do not have tooth structure and calcification within the lesion. Eruption cyst can be differentially diagnosed clinically due to the soft, bluish swelling expanded into the oral cavity.5

Radiographic features of dentigerous cysts include unilocular, well-circumscribed, usually symmetric radiolucency larger than that of normal follicular space, enclosing crown of the unerupted permanent tooth. The border is ill-defined, if the cyst is infected.6 Histopathological examination revealed thin connective tissue containing islands of the odontogenic epithelium with a layer of the squamous epithelium lining the lumen of the cyst. Inflammatory cell infiltration of connective tissue was seen. The presence of Rushton bodies, which are peculiar, hyaline bodies, seen within the epithelium lining.6

Various treatment modalities have been described in the literature for the management of dentigerous cyst. The treatment of choice of the lesion depends on the various factors, such as size and location of the cyst, age of the patient, tooth position in relation to the cyst, the degree of axial inclination, relation with the surrounding structures, and affected dentition.4,7 Enucleation should be performed when the lesion is small. Marsupialization is a conservative treatment approach in case when the cyst is associated with unerupted permanent tooth germ and important anatomical structures.7 In the present case report, marsupialization was the treatment of choice due to the large size of the cyst and its association with the unerupted permanent first premolar.

As dentigerous cysts are asymptomatic in nature, they can attain considerable large size without the notice of the patient, and this warrants the early clinical and radiographic detection of the cyst, so that early treatment planning will prevent or decrease the morbidity associated with the same. Marsupialization and decompression are very low invasive techniques that could easily be conducted by any dentist familiar with basic surgical procedures, to treat the pathology and preserve the tooth or teeth involved with the cyst.